Did US F-22s Almost Shoot Down Russian Aircraft Over Syria?

U.S. and Russian warplanes almost crashed into each other over Syria. And almost as important, those aircraft included America's vaunted... 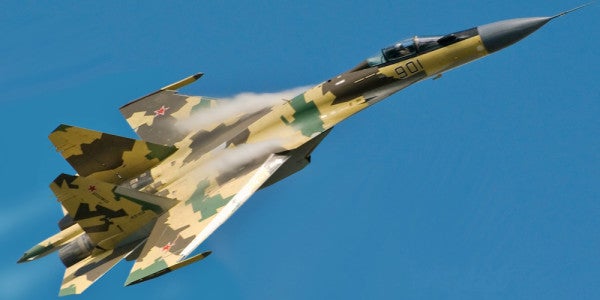 U.S. and Russian warplanes almost crashed into each other over Syria. And almost as important, those aircraft included America's vaunted but untried F-22 stealth fighter, and Russia's Su-35.

Yet disappointment awaits those aviation buffs and nationalists who savor the thought of a dogfight between the top American and Russian jets. There has no battle—so far.

However, theNew York Times reported last week that there have been several incidents in which Russian planes have flown dangerously close to American aircraft over eastern Syria.

“In one instance, two Air Force A-10 attack planes flying east of the Euphrates River nearly collided head-on with a Russian Su-24 Fencer just 300 feet away — a knife’s edge when all the planes were streaking at more than 350 miles per hour,” according to the Times. “The A-10s swerved to avoid the Russian aircraft, which was supposed to fly only west of the Euphrates. Other Russian planes have flown within striking distance or directly over allied ground forces for up to 30 minutes, escalating tensions and the risk of a shootdown, American officials said.”

More ominously, two F-22s responded to an Su-24 strike aircraft that made three passes over U.S.-backed forces for twenty minutes, said the Times. “During that time, the F-22 pilots attempted to contact the Fencer five times by radio with no response or reaction. The Air Force pilots showed restraint, but given that the actions of the Su-24 could have reasonably been interpreted as threatening to the American aircraft, the F-22 pilots would have been with their rights to fire in self-defense, officials at the Qatar air base said.”

U.S. officials accused Russia of violating an agreement in which American and Russians would fly on opposite sides of a forty-five-mile stretch of the Euphrates. Russian aircraft have been crossing that line a half-dozen times a day, according to the Americans.

Related: Putin Declares ‘Victory’ In Syria Over ISIS — And The US, Sort Of »

Not surprisingly, Russia's version of the story is different. “An American F-22 fighter actively prevented the Russian pair of Su-25 attack aircraft from carrying out a combat mission to destroy the Daesh stronghold in the suburbs of the city of Mayadin in the airspace over the western bank of the Euphrates River on November 23,” announced a Defense Ministry spokesman. “The F-22 aircraft fired off heat flares and released brake shields with permanent maneuvering, imitating an air battle.”

Also ominous was this statement by the Russian military: “After the appearance of a Russian multifunctional super-maneuverable Su-35S fighter, the American fighter stopped dangerous maneuvers and hurried to move into Iraqi airspace.”

In other words, while not directly issuing a threat, American officials are saying that they have the right to shoot down Russian aircraft attacking or even buzzing U.S.-sponsored groups in Syria. Meanwhile, Russia maintains that U.S. aircraft in Syrian airspace aren't there legally (unlike the Syrian government authorizing Russian forces in their territory), which presumably means that American planes can be destroyed legally.

Also interesting is the assertion that a “multifunctional super-maneuverable” Su-35 drove off an F-22. Translation: Russia says the Americans took a look at their advanced fighter and fled.

This doesn't sound like diplomacy or statecraft. It sounds like the prelude to a game of chicken, that infamous game where the most common outcome is that both sides lose.