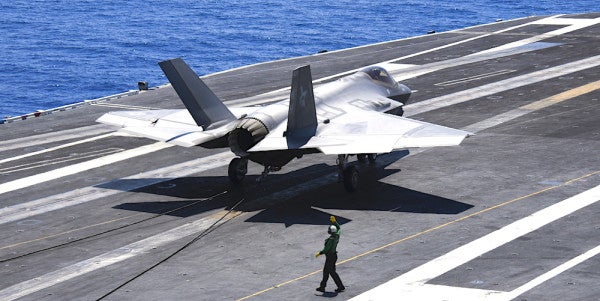 Operational Test-1 (OT-1) marks the first time the stealthy single-engine F-35C aircraft have flown with a carrier air wing during cyclic operations, where aircraft simulate operationally representative missions and where jets are continuously launching and recovering onboard the carrier. Previously, the F-35C had only flown carrier qualification sorties together with the F/A-18E/F and other carrier air wing aircraft. In addition to testing how well the F-35C integrates with the rest of the carrier air wing, the Navy will evaluate how effective the new Joint Strike Fighter is during operational usage.

“This is the first time we really see how the aircraft works on the aircraft carrier,” Rear Adm. Dale Horan, director, Joint Strike Fighter Fleet Integration Office, said. “How we do maintenance and sustain it while we’re at sea; how it integrates with the ship; how it interoperates with communications, data links, the other aircraft; and how we conduct missions and tie in to other aircraft when we conduct missions.”

One of the Navy’s goals for OT-1 is to evaluate how VFA-125’s F-35Cs integrate with the rest of CVW-7 and Carrier Strike Group 12 and how effectively the jets complete their missions in an operational setting. During OT-1, the F-35Cs are flying alongside F/A-18E/F Super Hornet strike fighters, Boeing EA-18G Growler electronic attack aircraft, Northrop Grumman E-2D Advanced Hawkeye airborne early warning planes and other aircraft just as they would during real-world combat missions.

“The effectiveness piece is what we’re doing when we’re airborne and executing missions,” Capt. Matt Norris, Joint Strike Fighter Operational Test Team, said. “We’ve been integrating with the strike group and accomplishing many missions like defensive counter air and anti-submarine warfare, for instance.”

While the Navy is evaluating if the F-35C is mission effective, the service also has to ensure that the new jet is operationally suitable for the carrier flight deck environment. “We hope to see how it integrates onboard the ship,” Horan said. “Can we maintain it? Can we get the parts? Can we get it airborne? Can we repair it if it has a problem? Those are the kinds of things.”

Indeed, both the F-35C and the Nimitz-class carrier design might need some modifications to operate effectively at sea. The Pentagon conducts operational testing to find and fix any issues that might arise. However, once the F-35C is deemed suitable to enter service with the Navy, it could be a game changer for the service’s carrier air wings. It will take the Navy sometime to learn how to fully exploit the F-35C’s capabilities and to integrate the jet completely into its forces.

“The F-35C brings stealth, enhanced electronic capabilities and a different sustainment model,” Horan said. “Operating this new generation of aircraft out on the aircraft carrier brings a different set of tools, techniques, and procedures, and we’re learning how to integrate them into the battle group.”

But while OT-1 brings the Navy one more step closer towards declaring the Joint Strike Fighter operational with the fleet, there is still work left to be done. The lessons learned during OT-1 will lay the groundwork for future F-35C deployments aboard the Navy’s Nimitz and Ford-class aircraft carriers once the service declares initial operating capability with new jets. However, even then naval aviators will have to continue refining their tactics, techniques, and procedures before the Navy fully realizes the F-35Cs’ potential. It will be a years-long process.