A recently leaked video sheds light on one of the F-35's possible weapons configurations, previously dubbed as "beast mode" in a Lockheed Martin infographic 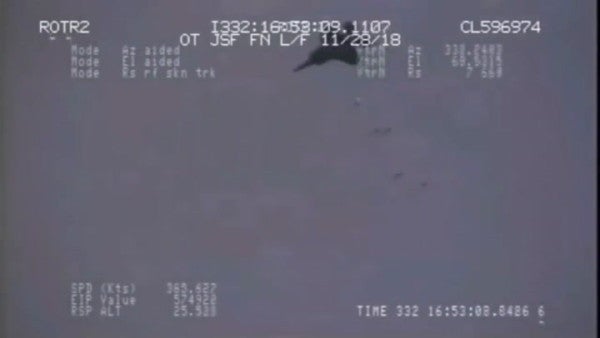 A recently leaked video sheds light on one of the F-35's possible weapons configurations, previously dubbed as “beast mode” in a Lockheed Martin infographic.

The video, dating back to November of 2018, depicts an F-35 simultaneously firing five air-to-surface missiles against five test targets. At least one of the targets– a light vehicle– can be seen moving.

Though it is presently unconfirmed where the trial took place and what kind of guided bomb was used, defense expert Ian D'Costa offered some clarifying insight to The Aviationist : “It's an F-35 at NTTR (Nellis Test and Training Range), I could be wrong, but it dropping five Paveway IVs and hitting all five targets with GEOT (Good Effect On Target).”

While the site's location remains disputed, the bombs depicted in the video are widely believed to be Paveway IV's. Paveway IV is a 500-pound, British laser-guided bomb, described by the U.K military describes as “an advanced and highly accurate weapon that provides the RAF's strike force with a state-of-the-art precision guided bombing capability.”

Paveway IV, introduced in 2008 and currently confirmed to be in use by the British and Saudi Arabian militaries, was developed and manufactured in close cooperation with US supply chains. This test could be the latest in a round of recent US Air Force Pavement IV trials on the F-35 platform, though it should be kept in mind that the video is likely a snippet from a series of tests involving multiple weapons.

The F-35 is compatible with several weapon layouts to accommodate a wider range of tactical scenarios. The “stealth” configuration consists of four AIM-120 AMRAAM missiles for air-to-air missions, or a mixture of four AIM-120's/GBU-31 JDAM “smart bombs” for air-to-ground missions, all loaded into the F-35's internal armaments bay. As the name implies, stealth loadouts are designed to minimize radar cross-section in a “first day of war” setting where the enemy's anti-air systems are operating at full capacity.

As more hostile anti-air systems are eliminated, the conflict enters into a ” third day of war ” stage– also known as beast mode– when the F-35 becomes free to deploy externally-mounted weapons with a larger radar footprint.

The F-35's beast mode boasts a whopping maximum of fourteen AIM-120 missiles and two smaller AIM-9X missiles for air missions, or six GBU-31's along with four AIM-120's/9X's for ground missions.

This heaping of weapons is housed in a combination of external and internal storage bays, which also appears to be the case in this recently leaked test. A Dutch F-35 flying in beast mode was sighted last year, armed with four GBU-31's and two AIM-9X sidewinders in its external bay. F-35's sporting the full, sixteen-missile air-to-air suite have yet to be spotted.

These leaks come hot on the heels of an air show teaser clip released last week by Capt. Andrew “Dojo” Olson, depicting a series of impressive aerobatic maneuvers performed with an F-35A.

Following a year of technical challenges and difficult cost-benefit questions, the F-35 seems to be starting 2019 in a decidedly more positive key. Only time will tell if this trend endures.

SEE ALSO: Watch An Air Force F-35 Pull Off Some Insane Maneuvers In The Skies Above Arizona

WATCH NEXT: An F-35 Elephant Walk At Hill Air Force Base