“It was a fantastic airplane for it’s time" 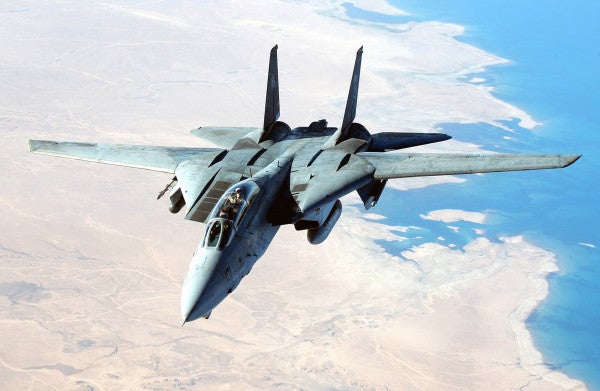 Ret. Rear Admiral Fred Lewis was 34 when he first flew an F-14 Tomcat out of Naval Air Station Oceana in Virginia Beach. It was 1974, and he was serving in one of two squadrons at the master jet base that stood up the new machine.

“It was a fantastic airplane for it’s time,” said Lewis, 79. “Really capable.”

But over the years — as the F-14 became a symbol of America’s air superiority and was later retired — there was no public place in Virginia Beach to remember the plane and those who gave their lives flying it. That will soon change.

A new F-14 Tomcat monument will be installed next month in the existing Naval Aviation Monument Park in Virginia Beach, Virginia. In addition to those who died flying the famed jet, it will honor crew members who built and sustained the aircraft.

For a time, Oceana was home base for the Navy’s F-14 Tomcat fleet. The two-person Tomcats were built by Grumman Aerospace and could fly high at supersonic speeds. Pilots and radar-intercept officers would use radar-guided and heat-seeking missiles to target enemies.

One of the early successes of the aircraft was in 1981, when two F-14 pilots protecting two U.S. supercarriers shot down Libyan aircraft in the Mediterranean Sea.

In 1986, actor Tom Cruise flew a Tomcat — or at least pretended to — in the movie Top Gun.

Lewis has spearheaded an effort to commemorate the famed aircraft the past few years, helping a committee launch a nonprofit organization — the F-14 Tomcat Monument Association — to collect contributions so that the memorial could be donated to the city.

“The response was really positive throughout the community of veterans and from people who had flown and operated and maintained the Tomcat,” Lewis said.

Two monuments, each costing about $90,000, will be built. One in the Naval Aviation Monument Park at the Oceanfront and another in an aviation museum in Pensacola, Florida. Lewis is working on a third for San Diego.

The Virginia Beach park sits between Atlantic Avenue and the Boardwalk at 25th Street. It opened in 2006 and features bronze statues and granite storyboards depicting significant eras in naval flight.

The Tomcat monument will be a four-sided granite obelisk, similar to the A-6 Intruder obelisk already in the park. It will be located about 30 feet from the A-6 monument, near the park’s east end and the Norwegian Lady statue.

Four laser-etched panels will show different images of the F-14 in action with brief descriptions of its service and those who maintained them. A list of donors will be featured at the bottom of the panels.

“You’ll see some spectacular images and verbiage about the airplane and what it meant to all of us,” Lewis said.

One panel will be dedicated to the 68 people who lost their lives flying Tomcats.

Alex Rucker, 77, served as the creative consultant of the monument planning committee. He flew F-14s with Lewis.

“It was huge part of my life,” Rucker said. “It’s a real honor to have this airplane memorialized there in the park. “

The committee was planning a dedication ceremony this month, but the coronavirus put everything on hold. It might happen this fall.

The new monument will be shipped by truck from Ohio and installed in a few weeks.

Lewis is looking forward to finally seeing it in the park.

“The people who have flown the airplane will be very proud,” Lewis said. “But more importantly, it’s going to be a cool thing for young kids to take a look at and maybe, hopefully, follow in our footsteps.”