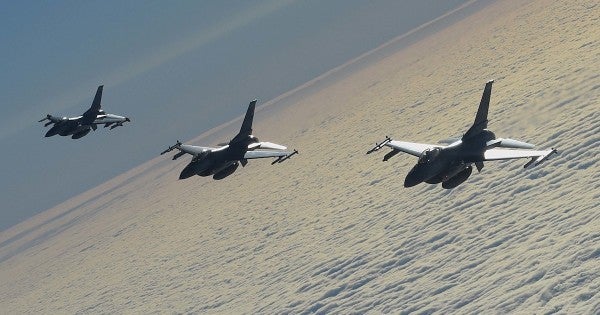 An F-16 fighter jet with the 180th Fighter Wing performed an emergency landing Tuesday morning at Toledo Express Airport after an onboard weapon jammed during training.

Staff Sgt. Shane Hughes, spokesman for the Ohio Air National Guard base at the airport, said F-16s were conducting routine training in Michigan when one experienced what's known as a “hung gun.” He said a 20-millimeter cannon jammed, and standard procedure requires an emergency landing.

“They returned to base to have that checked out,” Sergeant Hughes said.

“The aircraft landed safely and without incident, and taxied to the Air National Guard base under its own power,” she said.

The sergeant said there were no flight-related issues and both the pilot and aircraft are safe. He said in-flight emergencies can range from catastrophic engine failure to the equivalent of a check-engine light, all requiring emergency landings.

“They're not uncommon,” Sergeant Hughes said. “They happen pretty routinely.”

People who live near the military group's base could see or hear F-16s taking off and landing at various times. They also might notice increased traffic in the area and unfamiliar noises like sirens, messages from loudspeakers, and “loud booms,” the statement said.

WATCH NEXT: That Time An Air Force Colonel Took An F-16 For A Booty Call