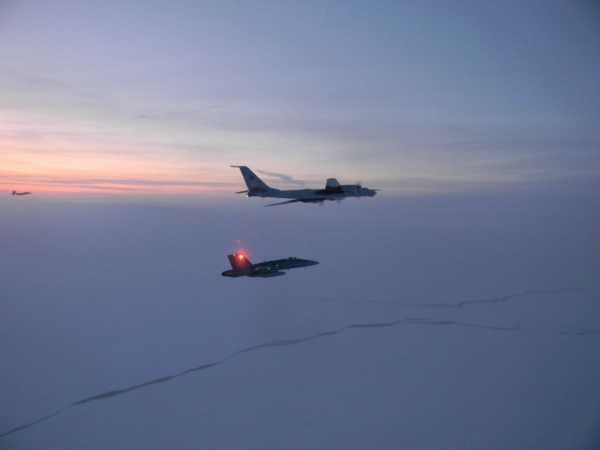 Three of those flights prompted NORAD to send aircraft out to keep an eye on them — including U.S. Air Force F-22 Raptor stealth fighters from Joint Base Elmendorf-Richardson near Anchorage, where pilots were waiting.

“We always have somebody who is ready to go in the event that we get the call,” said 1st Lt. Brett Meyer, an F-22 pilot with the 90th Fighter Squadron, part of the 3rd Operations Group under the 3rd Wing.

“First thing, you're going to get what we call the claxon,” Meyer told Insider on Friday. “You're going to get a call saying, 'Hey, this is what the mission is. This is what we need you to go do.' And from there it's a scramble down to your jet to get started and get airborne.”

The F-22s were joined Canadian CF-18s during an intercept of Russian aircraft in early March.

“Any time that our Air Defense Identification Zone is getting penetrated, the Canadians are also getting into the mix and supporting us as part of our continued efforts to defend North America,” Meyer said.

The intercepting aircraft are in touch with their command and control, which “has a direct line to the NORAD commanders,” who provide “guidance on what we're going to be going out and executing that day, all as part of our broader NORAD mission of defending the homeland,” Meyer added.

In approaching the Russian aircraft, Meyer said U.S. pilots take “every precaution that we can to exercise good airmanship to ensure safety of flight … for all aircraft involved.”

“The intercepts themselves we run in accordance with our current NORAD guidance,” Meyer added.

U.S. pilots are close enough to sometimes make eye contact with their Russian counterparts, but the goal isn't to directly interact with them, Meyer said.

“We can see each other. They know that we're there,” Meyer added, “and we know obviously that they are there.”

Two of the Russian aircraft intercepted this year lingered in the ADIZ for four hours, and seeing an operation of that scope and duration play out is “a humbling experience,” Meyer said.

It's “a mission that we are constantly training for and we're ready for all the time, but to actually go out and execute it, see all of the pieces come together before your eyes, it's really awe-inspiring,” Meyer said. “Beyond that, you're just focused on staying alert, staying present, and ready the entire time that you're out there.”

But for Meyer, one of the most memorable parts had nothing to do with the Russians.

Intercepts of Russian aircraft are a centerpiece of NORAD's mission and incrasingly common. NORAD has intercepted six or seven Russian flights in the ADIZ a year since Moscow restarted long-range aviation patrols in 2007, U.S. officials said last year.

NORAD reported the first such Russian flight of 2020 at the end of January, when two Tu-160 Blackjack bombers flew into the Canadian ADIZ, though NORAD aircraft don't appear to have intercepted them. (NORAD is a binational agreement that divides the region into Alaskan, Continental US, and Canadian sections, monitored by their respective authorities.)

Russian Tu-142 maritime reconnaissance aircraft entered the Alaskan ADIZ over the Beaufort Sea on March 9 and on March 14 — on the latter occasion, a pair of them flew near a U.S. submarine exercise in the Arctic. In both cases, F-22s escorted the Russian aircraft the entire time they were in the ADIZ.

The most recent intercept came on April 8, when F-22s escorted two Russian IL-38 maritime patrol aircraft over the Bering Sea, north of the Aleutian Islands.

On none of those four occasions did the Russian aircraft enter U.S. or Canadian sovereign airspace, which extends 12 nautical miles from the coast.

Three intercepts in March and April are “not necessarily a spike out of historical norms,” Air Force Gen. Terrence O'Shaughnessy, commander of NORAD and U.S. Northern Command, told reporters on April 21, describing the flights as part of a “continuous effort” by Russia to “probe and check and see our responses.”

“We just want to make it very clear to them — which we did, by the way we intercepted them — that there are no vulnerabilities as a result of COVID-19,” O'Shaughnessy said, referring to the disease caused by the coronavirus.

Meyer said the intercepts weren't meant to be covert, describing them as “overt strategic messages, showcasing not only to our adversaries but also our allies that we stand ready 24/7, 365 … and show that we are capable and ready to defend the homeland.”

The March flight near the U.S. submarine exercise raised concerns that the Russian aircraft were attempting to gather intelligence.

Meyer said he couldn't speak to specific Russian missions but echoed O'Shaughnessy by describing them as “part of an ongoing probe from Russia” for “gauging our response and our ability to go out and meet them.”

NATO forces have frequent encounters with Russian aircraft over Europe, including several incidents in which U.S. officials have criticized the Russians for “unsafe and unprofessional” behavior.

But Lt. Col. John Krellner, deputy commander of the 3rd Operations Group, said encounters around the Alaskan ADIZ had been above board.

As the U.S. military reorients itself for “great power competition” and for a potential clash with Russia or China, it has focused more on the Arctic, where harsh conditions pose a unique challenge.

“I've been flying fighters for almost 20 years, and I've flown all around the world. I've flown 500 combat hours in two different wars, and flying in the Arctic is uniquely challenging compared to all of the other experiences that I've had,” Krellner said.

“Flying is inherently unforgiving, and the vast distances that we deal with, with extremes in weather [and] temperature” in the Arctic magnify that, Krellner added. “We step up our professionalism a little bit every time we strap on the jet to fly in the Arctic because of those inherently challenging conditions.”

“You're running into curvature-of-the-earth and line-of-sight radio [issues] if you don't think about it ahead of time,” Krellner said.

They plan to mitigate those issues when flying in the Alaskan NORAD Region, Krellner said, “but you can definitely very quickly fly yourself out of radar or radio coverage if you're not considering those factors.”

O'Shaughnessy has said the military is trying to overcome those challenges to domain awareness, looking to work done in the commercial sector on communications using satellites in low-earth-orbit.

JBER maintainers who keep Raptors flying in Alaska are “nothing but short of incredible,” Meyer said. “Their ability to keep our aircraft flying and keep them ready to go and ready to execute the NORAD mission is pretty awesome.”

The F-22s at JBER are being joined by two squadrons of F-35s, the Air Force's only other fifth-generation fighter, at Eielson Air Force Base near Fairbanks, north of Anchorage.

The first two of 54 F-35s landed at Eielson on April 21. The remaining jets will arrive by December 2021, making Alaska the state with the highest concentration of “combat-coded, fifth-generation fighter aircraft,” the Air Force said.

With Raptors at JBER and F-35s at Eielson, “you have the perfect training field for the F-35 to develop,” said Col. Benjamin Bishop, commander of the 354th Fighter Wing at Eielson.