The Department of Defense has downgraded the border mission for U.S. troops, scrapping the name “Operation Faithful Patriot” and replaced... 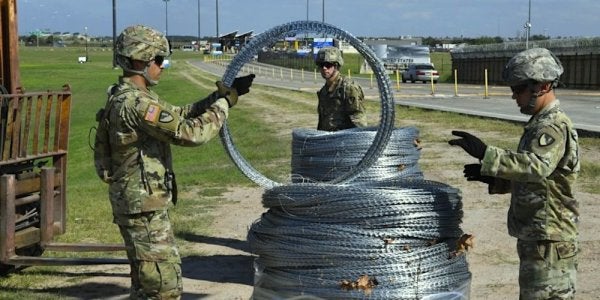 The Department of Defense has downgraded the border mission for U.S. troops, scrapping the name “Operation Faithful Patriot” and replaced it with “border support.”

“We are not calling it Operation Faithful President,” Pentagon spokesman Lt. Col. Jamie Davis told Business Insider, confirming an earlier report from The Wall Street Journal. “We are calling it border support.”

The Pentagon refused to offer an explanation for the decision to change the name, which was first introduced by U.S. Northern Command. “The mission status remains unchanged,” NORTHCOM told Business Insider.

The operation, announced last week, has already seen more than 5,000 active-duty military personnel deployed to locations across Texas, Arizona, and California with the possibility that as many as 8,000 troops could head south as migrant caravans march toward the U.S.-Mexico border.

The largest troop deployment of the Trump presidency came as the president called the approaching streams of thousands of migrants an “invasion” and a national emergency requiring the advanced capabilities of the U.S. military, a dramatic move that came in the days before the 2018 mid-term elections.

As troops are barred by law from law enforcement activities on U.S. soil, the units deployed to the border have been relegated to a Title X support role, which involves constructing barriers, building bases, and offering logistics and other relevant assistance to Customs and Border Patrol.

Over the past week, there have been reports that the Pentagon is assessing a much lower threat posed by the migrants than that of the White House, which has, at times, characterized the migrant groups as roaming gangs of violent criminals.

The Department of Defense said Monday that active-duty troops deployed to the border will not receive danger pay, additional compensation for activities in a dangerous environment.

The name change for the military's border mission, which critics have called a political stunt, occurred on Election Day. Secretary of Defense Jim Mattis, who approved the deployment in response to a Department of Homeland Security request, responded to such accusations last week, saying, “We don't do stunts in this department.”

Defense officials speculated to The Wall Street Journal that the decision to scrap “Operation Faithful Patriot” was made because the mission is not a true operation in the traditional sense of the word.