Navy Lt. Steven Combs determined an emergency landing of his transport plane on the choppy waters of the Philippine Sea... 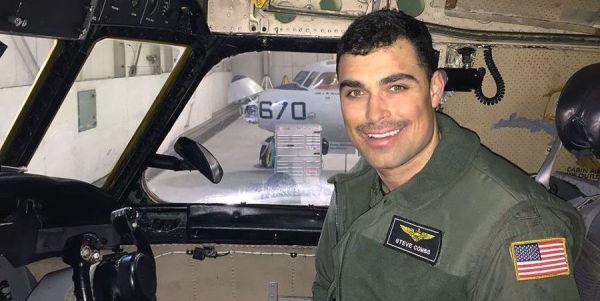 Navy Lt. Steven Combs determined an emergency landing of his transport plane on the choppy waters of the Philippine Sea was necessary as the aircraft he was piloting failed only miles from the deck of the USS Ronald Reagan, according to Navy officials.

The 28-year-old pilot’s decision to land the C-2A Greyhound on the water ultimately saved the lives of eight of the 11 people aboard the aircraft, Combs’ co-pilot told Navy investigators probing the Nov. 22 crash. Combs, Seaman Matthew Chialastri and Seaman Apprentice Bryan Grosso were declared dead in the crash after their bodies were not recovered during a three-day search.

The Navy is considering a posthumous award for Combs’ actions, Flanders added.

Those final actions, which allowed rescuers to retrieve the eight survivors within 45 minutes of the crash, did not surprise people who knew Combs best, the pilot’s sister Elizabeth Combs told reporters after his death.

“Even in his last moment, he was looking out for others. I wouldn’t have expected anything less,” she said of her brother, according to the Berkshire Eagle, a newspaper in Pittsfield, Massachusetts where they grew up. “We are so, so proud of him.”

Combs commissioned into the Navy in 2011 after graduating from the University of Colorado and was assigned to the Fleet Logistics Support Squadron 30 and the Reagan as part of Carrier Air Wing Five, according to the Navy.

Elizabeth Combs and friends of the fallen sailor described him as an athletic, fun-loving man who’d grew up dreaming of flying airplanes. He especially loved downhill skiing, and competed in the sport growing up, she said.

“He was a blast to be around and had a great sense of humor. He was always laughing,” Brian Pedrotti, Combs’ childhood friend, told Fox 13 News. “Whatever he put his mind to he could do, and he never stopped until his goals were complete.”

Chialastri was an aviation boatswain’s mate from Baton Rouge, Louisiana. He was a 2013 graduate of Woodlawn High School, where he was the valedictorian of his class, according to the school.

His Junior ROTC instructor at the school described him as loyal and dependable, telling the New Orleans’ newspaper The Advocate that Chialastri quickly made an impression as a freshman in the program and was leading older students before he left the program his sophomore year to focus on his studies.

“He was just that good and he knew how to talk to them so it was never an issue of them getting mad or upset,” retired Sgt. 1st Class Jill Pearl said, adding she was proud when he enlisted in the Navy.

Grosso, an aviation ordnanceman, had only recently completed initial Navy training and joined the Reagan’s crew, according to the Navy. He was a 2017 graduate of West Florida High School in Pensacola, Florida where he played lacrosse.

Justin Luciano, his high school coach, described him as a “really good kid.”

“He was fun loving,” Luciano told the Pensacola News Journal. “Every time I saw him in the hallways he was laughing, joking having fun. There was always a smile on his face.”

One of Grosso’s naval instructors wrote she had “high hopes” for his career, in a public Facebook post.

“You stood out … because you were such a good person, acted very mature and had a big heart,” Petty Officer 1st Class Justine Chanelle Ramos wrote. “You’re a great sailor and a friend to all of us, you will always be in our hearts and thoughts. May God give your family the strength for the loss, I cannot imagine the pain everyone is going through right now.”

It remains unclear precisely what caused the aircraft to fail about 500 miles southeast of Okinawa on a routine flight from Marine Corps Air Station Iwakuni to the Ronald Reagan during a joint exercise with the Japan Maritime Self-Defense Force, Flanders said.

It appears the C-2, which is designed to carry people and cargo, suffered a rare double engine failure, two Navy officials told Stars and Stripes on the condition of anonymity because they were not authorized to discuss the ongoing investigation. The officials said it was unclear what would have caused the engines to fail.

C-2s have been in service since the 1960s, but have a remarkable safety record, Flanders said.

The Nov. 22 crash was the first fatal C-2 crash since 1980, when the Naval Safety Center began collecting data on such incidents. Flanders said, in that time, the turbo-prop aircraft has only had four incidents characterized as Class A mishaps, which include damage of more than $2 million or a fatality.

“This is one of the safest aircraft, if not the safest, in naval aviation,” he said. “An incident like this – it’s almost unheard of.”

There was no record of any pilot previously attempting to land a C-2 on water under the conditions that Combs did last week, one of the unnamed officials said.

While pilots train to handle emergency situations, it is difficult to simulate certain situations, such as the ones that Combs and his co-pilot experienced, Flanders said.

“It took a great deal of skill and poise to do what he did,” he said.

The Reagan held a memorial service Saturday to commemorate the sailors who died last week. During the service, Combs’ commander recalled the late pilot’s life-saving actions.

“The loss of one of our pilots weighs heavily on the entire Carrier Air Wing Five team. Lt. Combs will always be remembered as a hero,” said Capt. Michael Wosje, the commander of the Reagan’s Carrier Air Wing 5, according to a Navy statement. “I am proud to have flown with him.”