The remains of Staff Sgt. Ian McLaughlin arrived at Fort Bragg a week after he was killed Jan. 11 by an improvised explosive device in Afghanistan. 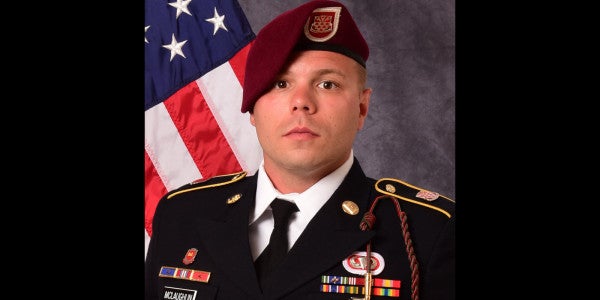 The remains of Staff Sgt. Ian McLaughlin, 29, of Newport News, Virginia, arrived back to Fort Bragg a week after he was
killed Jan. 11 by an improvised explosive device in Afghanistan.

Capt. Claire Cvetkovski, a chaplain, prayed, giving thanks for “the life and honorable service,” of McLaughlin.

“Lord, may your perpetual light shine upon him, his family and his loved ones, and we ask that you pour our comfort upon them,” Cvetkovski prayed. “We pray, Lord, that your strength and our faith can help us believe in what we cannot see Lord that your spirit leads us through the years that are to come and bring us together again with Ian and the joy of your eternal home.”

After Tara McLaughlin was given a moment to say goodbye, hundreds of other paratroopers lined the roadway to salute as the hearse was escorted away.

Helping provide the dignified transfer escort of McLaughlin from Fort Bragg to the Lafayette Funeral Home in Fayetteville were more than 50 motorcycles and about 65 members of the North Carolina Patriot Guard Riders.

The Patriot Guard's purpose is to show honor and respect for fallen soldiers, veterans and first responders, said Steve “Scooper” Havens, assistant district captain for the Sandhills Division of the Patriot Guard.

“They will never be forgotten, whether they're in the service for a week or they've been in for 40 years,” Havens said. “They will always be remembered.”

A statement from the 82nd Airborne Division last week said McLaughlin's wife and four children are among the survivors.

His
obituary states a funeral will full military honors will be held Tuesday at Fort Bragg.

McLaughlin's obituary states he joined the Army in 2012 as a heavy construction equipment operator.

His first assignment was with the 62nd Engineering Battalion at Fort Hood, Texas, where he met and married his wife, his obituary states.

He graduated Airborne School in 2016 and was later assigned to the 307th Brigade Engineer Battalion at Fort Bragg. In 2018, he became a jumpmaster.

Maj. Gen. James Mingus, commander of the 82nd Airborne Division, said McLaughlin and Villalon represented the best of the nation and Army.

“They went when our nation called and paid the ultimate sacrifice,” Mingus said last week. “They will be honored, mourned, but never forgotten and we are committed to taking care of their families for life.”

“The impact that they made on the lives of their fellow paratroopers, the (battalion) will not be forgotten,” the senior leader said Monday. “They leave a legacy of professionalism and zeal for life.”

Staff writer Rachael Riley can be reached at
rriley@fayobserver.com or 910-486-3528.