A legacy of service that began in 1942 was honored this week at Camp Johnson. Congressional Gold Medals were awarded... 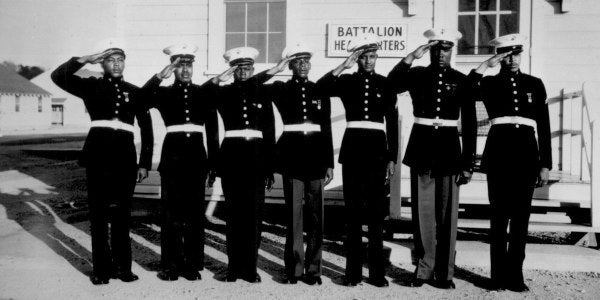 A legacy of service that began in 1942 was honored this week at Camp Johnson.

Congressional Gold Medals were awarded to the families of three Montford Point Marines Thursday during a ceremony at the Bachelor Officers Quarters aboard Camp Johnson to honor the service and sacrifice of the country’s first black Marines.

For retired Marine Will Smith, the medal ceremony solidified the legacy of service that his grandfather began in 1942 when he stepped foot in the racially segregated training camp of Montford Point, which is what is now known as Camp Johnson.

“My grandfather was one of the original Montford Point Marines,” said Smith, a recently retired major in the Marine Corps. “He enlisted in the Marine Corps back in 1942 and served in Saipan, California, and … here on Camp Johnson. This is where all of the character and integrity was instilled in him.”

It was the first federal action, though not a law, that promoted equal opportunity and prohibited employment discrimination in the United States.

That federal action prompted the construction of Montford Point, where approximately 20,000 black recruits trained from 1942-1949, until President Harry S. Truman signed an executive order that ended segregation in the military on July 26, 1948.

During Thursday’s ceremony Smith accepted the medal on behalf of his grandfather, Sherman Ray.

“The amazing thing is I was able to get promoted the first time and the last time right on this same base,” Smith said on Thursday morning. “It brought back some nostalgia and a lot of history of our family that we can keep the legacy going.”

“The legacy that the Montford Point Marines left behind them is very important for the Marines coming through Camp Johnson,” said Col. David Grant, commanding officer of Marine Corps Combat Service Support Schools and area commander of Camp Johnson. “We’re actually standing on, or very close to, where those first Marines trained. This was the training ground.

“This ceremony today is a debt that we can’t ever repay to those Marines that came before us, but it is our form of showing respect.”

The Congressional Gold Medal is the highest civilian honor bestowed by Congress.