The family of a Muslim Marine recruit from Taylor, Michigan, who died in a fall at boot camp last year... 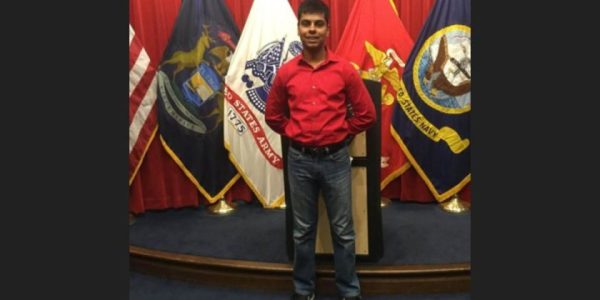 The family of a Muslim Marine recruit from Taylor, Michigan, who died in a fall at boot camp last year after allegedly being hazed and abused is suing the government for $100 million for his death, claiming “negligence on multiple levels of command.”

The lawsuit filed in U.S. District Court in Detroit claims the Marines “fostered a culture of abuse and hazing” at the training base at Parris Island, S.C., that led to the death of 20-year-old Raheel Siddiqui in a three-story fall from a barracks stairwell in March 2016.

In the lawsuit, the family's lawyer, Shiraz Khan of Southfield, wrote that “recurrent physical and verbal abuse of recruits by drill instructors, with a noted insufficiency of oversight and supervision” ultimately caused Siddiqui's death.

The Marines have maintained that Siddiqui's death, less than two weeks after he began boot camp, was a suicide, a conclusion that his family has rejected, along with suggestions that Siddiqui was somehow not prepared for the rigors of Parris Island.

The Corps did not immediately react to the lawsuit, a copy of which was sent to them by the Free Press on Saturday night.

According to a preliminary investigation, portions of which were released a year ago, Siddiqui had been abused physically and hazed and called “a terrorist” by his drill instructor. That report said he made a threat of suicide several days before his death but recanted it, with base mental health experts saying he was a low risk for hurting himself.

That report said that the morning Siddiqui died, he had complained of a sore, bleeding throat but was refused medical attention, instead being forced to run laps over and over again in his barracks. When he collapsed on the floor, his drill instructor allegedly slapped him. That is when Siddiqui ran through a door in the barracks and leaped over an exterior stairwell, falling three stories, the report said.

He died at a hospital several hours later. His family has maintained throughout that whatever happened — and they believe they still have not heard the whole story — Siddiqui was constitutionally and morally incapable of purposely killing himself as both a faithful Muslim and son.

Siddiqui's death sparked several investigations into complaints of hazing at Parris Island and the Marines say about 20 personnel were disciplined.

Only two people directly connected with Siddiqui's case face courts-martial, however: his drill instructor, Gunnery Sgt. Joseph Felix, in a proceeding set to begin Oct. 30, and Lt. Col. Joshua Kissoon, the battalion commander who the earlier report said wrongly kept Felix in charge of Siddiqui's platoon even though he was under investigation for the alleged abuse of another Muslim recruit, including ordering him into a dryer and turning it on.

Kissoon's court-martial is set for next year.

In the lawsuit filed by Siddiqui's family Friday, they say that not only were Marines at Parris Island negligent but so were recruiters who suggested that they were giving Siddiqui a great opportunity while not telling him about the hazing concerns, including the alleged incident involving another Muslim recruit.

The family noted that, despite the Marines' claims, Siddiqui never had any mental health issues or threatened suicide. Instead, they said, the Truman High School valedictorian had told family and friends he was looking forward to becoming a Marine and “will not quit no matter how hard it is.” He had spent months training with his recruiter before boot camp as well.

The lawsuit faces a difficult path forward, however. Under what's known as the Feres doctrine, the Supreme Court decades ago decided to effectively bar suits for injuries sustained by active-duty personnel related to their service — including training. Legal experts have told the Free Press in the past that getting around that may be virtually impossible short of getting Congress to change the law somehow.

But Khan argues in this lawsuit that the officers and instructors at Parris Island had a duty to protect Siddiqui and other recruits who were hazed and abused from harm — and to give them advance notice of what they might be getting into. He also argues that Siddiqui was discriminated against for his faith and suffered injuries — such as ligature marks on his body — not accounted for in any report but that are inconsistent with a fall.

He also said the Marines have yet to produce a single witness with “credible and/or verifiable information corroborating the allegation of suicide.” The family — along with U.S. Rep. Debbie Dingell, D-Dearborn — has been trying for months to get a local coroner to change the cause of death but so far to no avail.

He also noted that the Marines have refused to provide information, including the names of anyone involved in the case. As such, it lists as defendants unnamed Marine personnel throughout. Khan said requests to get additional information about Siddiqui's death through the Freedom of Information Act have been refused by the Marine Corps.

Following Siddiqui's death, the Marine Corps instituted changes at Parris Island, including a zero-tolerance policy for abusing and hazing recruits. But Training and Education Command in Quantico, Va., which oversees Parris Island, has refused to reveal details of the case — including items as routine as the charging document for Felix outlining the cruelty and maltreatment charge against him or court orders, claiming they could influence the outcome.

In the lawsuit, the Siddiqui family shows a clear desire to reveal not just any abuse Raheel may have suffered but also the failure of commanders who could have let it happen, saying, “inadequate supervision … created a permissive environment that allowed drill instructor misconduct to escalate in severity.”