A Navy captain who once commanded a destroyer squadron attached to the aircraft carrier USS Carl Vinson is the latest... 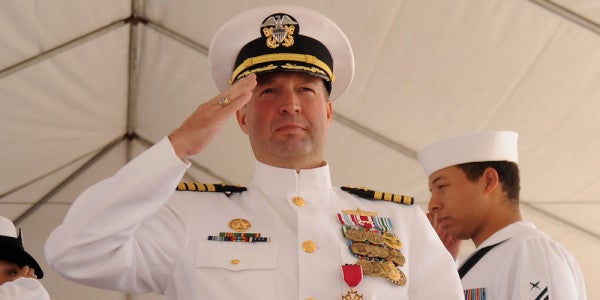 A Navy captain who once commanded a destroyer squadron attached to the aircraft carrier USS Carl Vinson is the latest to face charges in military court in connection with the long-running “Fat Leonard” scandal.

Capt. John F. Steinberger appeared briefly for an arraignment over video conference on Dec. 5 from San Diego, where he is assigned to the Undersea Warfighting Development Center. He faces charges including conspiracy, violation of a lawful order, conduct unbecoming an officer and a gentleman, graft, and bribery, according to a charge sheet.

“Fat Leonard” is the nickname for the massive corruption scandal that has embroiled the Navy’s 7th Fleet. It is named for Leonard Francis, the owner and chief executive of Glenn Defense Marine Asia. Francis pleaded guilty in 2015 to presiding over a conspiracy involving “scores” of Navy officials, tens of millions of dollars in fraud and millions of dollars in bribes and gifts in return for lucrative contracts to provide services to ships while in southeast Asia, according to the Department of Justice.

According to a charge sheet, Steinberger conspired with Francis from Jan. 22, 2011, through about April 27, 2012, and accepted gifts of “discounted and free hotel rooms, food, beverages, and services of prostitutes” at or near Kuala Lumpur, Malaysia; Manila, Philippines; Hong Kong; and Perth, Australia, in exchange for providing information about competitors and attempting to influence senior officials in the selection of locations of port visits and the husbanding of Navy vessels to the benefit the out-sized defense contractor.

Steinberger declined to enter a plea Tuesday. He is the fourth naval officer to appear before a military judge in Norfolk in recent months in connection with the scandal after the Justice Department declined to press federal charges. His appearance came just days after a federal judge in San Diego sentenced Cmdr. Bobby Pitts, of Chesapeake, to 18 months in prison after he pleaded guilty to obstructing an investigation while leading the Navy’s Fleet Industrial Supply Command in Singapore, the Associated Press reported Friday.

A trial is scheduled for June 7-15. If convicted on all charges, Steinberger could face a maximum sentence of 14 years and six months confinement, dismissal from the Navy, forfeiture of all pay and allowance, and a fine. According to a Navy biography, Steinberger received his commission in July 1987.

As the DOJ wades through the Fat Leonard scandal, it has declined to prosecute 482 people whose names it has subsequently forwarded to the Norfolk-based U.S. Fleet Forces Command, which is handling the Navy’s review. According to officials, the service has reviewed evidence in 318 of those and found that 48 have substantiated allegations of misconduct, most of which relate to accepting gifts from a prohibited source. Another 164 names are pending review.