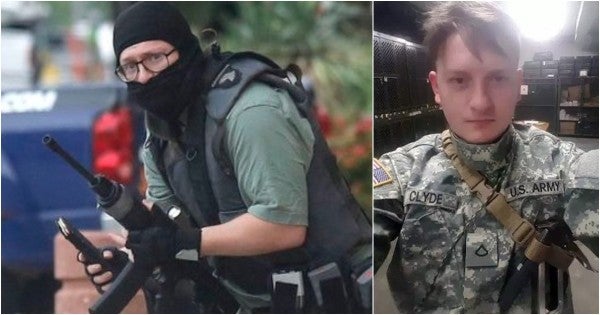 A relative of the man who opened fire outside downtown Dallas' federal building this week warned the FBI in 2016 that he shouldn't be allowed to buy a gun because he was depressed and suicidal, his mother said Thursday.

Brian Clyde's half-brother called the FBI about his concerns, their mother Nubia Brede Solis said. Clyde was in the Army at the time.

On Monday, Clyde opened fire with an AR-15-style rifle at the Earle Cabell Federal Building. He was fatally shot by federal law enforcement. No one else was seriously injured. His family believes Clyde wanted to be killed.

The special agent in charge of the Dallas FBI office, Matthew DeSarno, could not immediately be reached for comment.

But a federal law enforcement official confirmed the half-brother called a national hotline on July 1, 2016, leaving a message to report that Clyde was “suicidal and had a fascination with guns.”

But the official said the half-brother didn't report a threat against an entity or individual, so the FBI couldn't seize Clyde's weapons.

No history of violence

Public records show Clyde had no history of violence. Mental health struggles do not automatically prevent someone from owning a gun.

Because the FBI had no legal reason to pursue an investigation, no further action was taken.

Federal policy was changed after a gunman killed 17 people in February 2018 at Marjory Stoneman Douglas High School in Parkland, Fla.

Now, warnings like the one about Clyde are routed to police departments where the calls originated so local officers can follow up and ask the caller for more details. Today, the half-brother's call would be sent to officers in Washington state, where he lives.

Brede Solis said the FBI never spoke to her about the warning call. She said the half-brother told her about it when she called to tell him Clyde had been killed.

Clyde, who had enlisted in the Army right out of high school, had been placed in a mental health facility for two weeks in the summer of 2016, said Brede Solis, 59.

She recently found a report in Clyde's military paperwork saying he had suicidal thoughts as early as six months after his enlistment — about February 2016.

Clyde served at Fort Campbell in Kentucky for about 18 months before he was honorably discharged in February 2017. Typically, those who enlist serve for four years.

The half-brother contacted the FBI around the time Clyde was receiving in-patient treatment while at Fort Polk in Louisiana, during a training exercise that simulated combat conditions.

Their mother said the half-brother, who is also a veteran, didn't tell her or Clyde about the call because he didn't want to drive a wedge between them and himself.

After Clyde's discharge from the Army, he lived with his mother for two years while attending Del Mar College, a community college in Corpus Christi.

Brede Solis said that she knew her son had been depressed but that he told her he was doing better after leaving the Army in the winter of 2017.

She said she saw “no violent signs” when he moved back in with her.

Brede Solis said she didn't know when Clyde purchased the rifle he used in Monday's attack.

The Bureau of Alcohol, Tobacco, Firearms and Explosives has determined where Clyde got his rifle — identified by Dallas gun shop owners as a cheap version of an AR-15 — but the agency said the FBI has prohibited it from releasing any details.

Brede Solis said she'd never seen the rifle before but knew Clyde had a pistol, which he told her was for self-defense.

“I never saw any guns lying around the apartment,” Brede Solis said.

Brede Solis said she doesn't think her son should have had an assault weapon.

“I don't think people should have those types of guns,” she said. “Those guns are for war.”