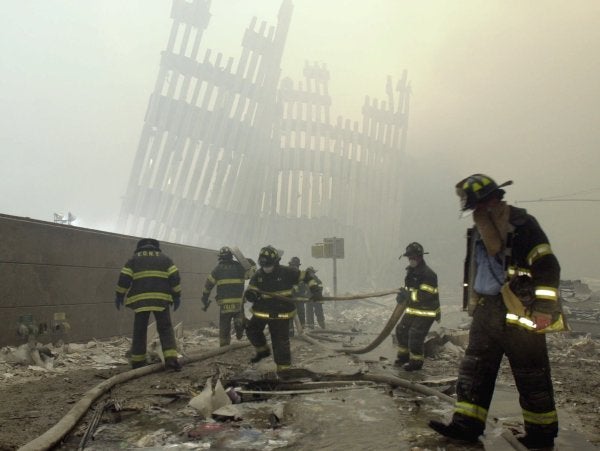 WASHINGTON — The Trump administration has secretly siphoned nearly $4 million away from a program that tracks and treats FDNY firefighters and medics suffering from 9/11-related illnesses, the New York Daily News has learned.

The payments were authorized and made by the National Institute for Occupational Safety and Health, which oversees the program. But instead of sending the funds to the city, the Treasury started keeping some of the money.

“This was just disappearing,” the program’s director, Dr. David Prezant, told The News. “This is the most amazing thing. This was disappearing — without any notification.”

“Here we have sick World Trade Center-exposed firefighters and EMS workers, at a time when the city is having difficult financial circumstances due to COVID-19, and we’re not getting the money we need to be able to treat these heroes,” said Prezant, the FDNY’s Chief Medical Officer.

“And for years, they wouldn’t even tell us — we never ever received a letter telling us this,” he explained.

Prezant was never able to get an explanation from NIOSH or the mammoth Department of Health and Human Services which has the agency under its umbrella.

After years of complaining, Prezant did get a partial answer when Rep. Pete King, R-N.Y., put his political weight behind the inquiry. That answer was that some other agency in the city has been in an unrelated feud with the feds over Medicare bills.

For some reason, Treasury decided to stiff the FDNY. Neither the Treasury Department nor the White House answered requests for comment.

King said whatever the circumstance is that forces a premier program for sick 9/11 first responders to go begging for help on the eve on the 19th anniversary of the attack — it has to end.

“I don’t even care what the details of this thing is. That fund has to be fully compensated, fully reimbursed. I mean, this is absurd,” he said. “If anyone were true American heroes, it was the cops and firemen on 9/11, especially the firemen, and for even $1 to be being held back is absolutely indefensible.”

King wrote to Treasury Secretary Steven Mnuchin over the summer asking what the problem was and for a solution. He got no response and has fired off another letter.

He also intends to confront Vice President Mike Pence on Friday, when both attend the Tunnel to Towers event marking the anniversary.

“I gotta tell him,” King said. “Forget the politics. I don’t want to sound naive, but this is terrible, absolutely inexcusable.”

“The Trump Treasury Department siphoning congressionally appropriated funds meant to pay for 9/11 workers’ health care is an outrageous finger in the eye to the firefighters, cops and other first responders who risked their lives for us,” Schumer said. “This needs to stop forthwith and payments to the workers’ health program must be made whole — and now.”

Congress created a temporary health program in 2010, with the James Zadroga 9/11 Health and Compensation Act. The program was extended by 75 years in December 2015, after sick and dying 9/11 workers made hundreds of trips to the Capitol pleading their cause.

“I’m not sure quite what to make of this other than it’s despicable,” said Jake Lemonda, president of the Uniformed Fire Officers Association. “We’ve fought very hard for many years for these funds to provide proper medical treatment for our sick and injured. The withholding of these funds without a legitimate explanation is inexcusable.”

Prezant said he’s been able to keep functioning because the Fire Department fronts the program the money, with the understanding that the feds will reimburse it under the 9/11 Health and Compensation Act.

The program was designed by Congress and the government to be self-sufficient. The lack of reimbursement means Prezant may have to do less to support the sick, even though the program is extremely cost-efficient, since its staff only draw city government salaries.

“The money that we don’t get means that physicians, nurses and support staff are not hired. We have not had to lay off anyone, yet, but we are at that brink,” he explained. “This just isn’t fair. It’s not fair to our patients.”

“The city has been covering some of our shortfall. But in this time of COVID crisis, that cannot continue,” he said.