The entire ensemble, right down to the minivan, is readily available to consumers through online shopping. 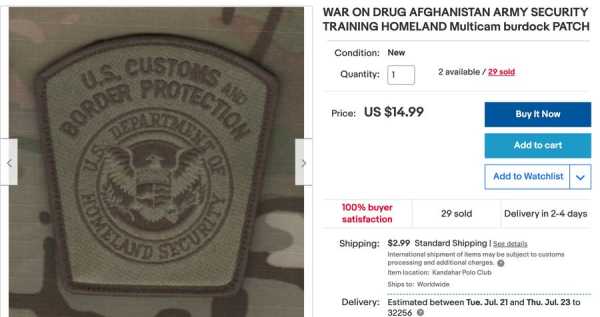 Federal law-enforcement officers detaining protesters and others in Portland, Oregon, and whisking them into unmarked cars on Wednesday did so while wearing military camouflage uniforms and other military-style gear.

Much of what the US Customs and Border Protection (CBP) agents were wearing, or apparel like it, is available to the public online, making it easier to impersonate law-enforcement agents — an issue that military officials and civilian authorities have warned about, particularly amid nationwide protests over the police killing of George Floyd.

The nature of the arrests led observers to question their legality, including Oregon Gov. Kate Brown and Vermont Sen. Bernie Sanders, who described it as “unmarked federal agents … pulling protesters off the street and jailing them without charge.”

Acting Department of Homeland Security Secretary Chad Wolf, who was in Portland overseeing the effort, characterized the protesters as “violent criminals attempting to tear down federal property” and alleged some assaulted officers with lasers and frozen water bottles.

On his social-media accounts, Wolf posted pictures of himself with Homeland Security personnel wearing military fatigues and DHS patches. Though it was not clear who the officers in the videos were, members of the Border Patrol Tactical Unit — an immediate-response force that operates under CBP, which is part of DHS — often wear military uniforms with CBP patches.

CBP Commissioner Mark Morgan said in a statement on Twitter that his officers were “clearly marked as federal LEOs & have unique identifiers.”

“You will not see names on their uniforms because these same violent criminals use this information to target them and their families, putting both at risk,” Morgan said.

But the personnel in Portland had few identifiable patches or markings, which are normally worn by members of the armed forces and law-enforcement agencies. At least one officer had what appeared to be a nondescript Velcro patch on his left shoulder, standard for the military and some firearm enthusiasts, and a single “POLICE” patch on his tactical vest.

A variety of such patches are sold online, including ones marked “POLICE” and a near replica of the Department of Homeland Security's patch. Patches of law-enforcement agencies and specific military units are also available on the internet, often sold under the pretense of catering to enthusiasts and veterans.

One of the videos circulating online shows two people wearing the US Army's uniform, the Operational Camouflage Pattern, while detaining a protester and escorting them to a minivan. The OCP is the Army's latest variant of the workday uniform and readily available online and in military-surplus stores.

Other US military gear worn by the federal officers, or close replicas of it, is also sold online, such as the military's combat helmet. Some military-surplus stores also sell previous versions of the helmet, some of which are still in use by military units and law-enforcement groups.

The entire ensemble seen in the videos, down to the minivan, is readily available to consumers, making it exceedingly difficult to discern between a legitimate authority and a provocateur masquerading as one.

Several people were arrested after they were accused of posing as members of the military and law enforcement in June during protests.

In Los Angeles, Gregory Wong was taken into custody after he wore similar attire to a National Guard member, ABC7 reported, citing sources. Wong, who was armed with an AR-15-type rifle and a pistol, was spotted by actual National Guard members after he fell into formation with them, the outlet said.

At a protest in Las Vegas, Zachary Sanns was charged with false impersonation of a federal officer, 8 News Now reported. Prosecutors said he stood on alongside police officers while armed with an AR-15-type rifle and wearing tactical gear, the outlet reported.

Both Wong and Sanns are veterans.

Army Gen. Mark Milley, the chairman of the Joint Chiefs of Staff, has highlighted concerns about members of law enforcement dressing like members of the military while responding to protests, saying there needs to be clear “visual distinction” between the two organizations.

“You want a clear definition between that which is military and that which is police, in my view,” Milley said during a congressional hearing on July 9. “Because when you start introducing the military, you're talking about a different level of effort there.”

Militarized Federal Agents from a patchwork of outside agencies have begun policing Portland (in rented minivans vans) without the explicit approval of the mayor, the state, or local municipalities. This is what that looks like in practice: pic.twitter.com/losap4SsgI

But civil-rights groups are sounding the alarm about federal officers patrolling Portland while in military gear, most of which is available online.

“What is happening now in Portland should concern everyone in the United States,” Jann Carson, the interim executive director of the American Civil Liberties Union of Oregon, said in a statement.

“Usually when we see people in unmarked cars forcibly grab someone off the street we call it kidnapping,” Carson added. “The actions of the militarized federal officers are flat-out unconstitutional and will not go unanswered.”