Federal prosecutors launched an investigation into whether the state-run Holyoke Soldiers' Home failed to provide the veterans who live there adequate care. 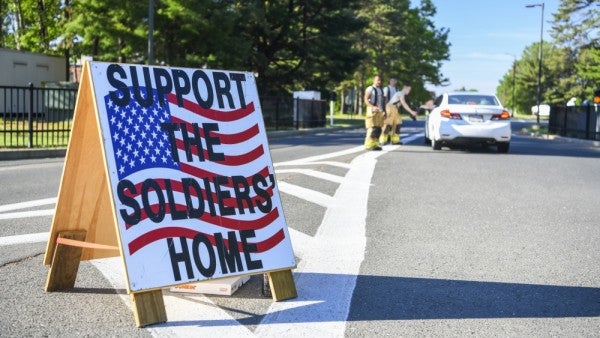 Federal prosecutors have launched an investigation into whether the state-run Holyoke Soldiers' Home failed to provide the veterans who live there adequate care — both during the coronavirus outbreak that has killed more than a dozen and generally.

U.S. Attorney for Massachusetts Andrew Lelling announced Friday morning that his office and the U.S. Department of Justice's Civil Rights Division have opened an investigation into the Holyoke facility “to examine whether the Soldiers' Home violated the rights of residents by failing to provide them adequate medical care generally, and during the coronavirus pandemic.”

At least 25 veterans who lived at the Holyoke Soldiers' Home have died in recent weeks amid an outbreak of the coronavirus. It's unclear exactly how many of the deaths are attributable to COVID-19 — the Baker administration did not respond to requests for updated numbers on Wednesday or Thursday.

“It would be difficult to overstate our obligation to the health and well-being of elderly and disabled military veterans and, by extension, to their families. The federal Civil Rights of Institutionalized Persons Act specifically protects the rights of those confined in state facilities like the Holyoke Soldiers' Home,” Lelling said.

“We will aggressively investigate recent events at the Home and, as needed, require the Commonwealth to adopt reforms to ensure patient safety in the future. My condolences to the families of those veterans who died while in the Home's care; we will get to the bottom of what happened here.”

Lelling's inquiry is at least the third to look into the Soldiers' Home. Gov. Charlie Baker tapped former first assistant U.S. attorney Mark Pearlstein last week to find out how the situation at the home deteriorated and Attorney General Maura Healey announced this week that her office had opened an investigation of its own.

As the number of deaths in Holyoke climbed this week, some staffers there went public with stories of staffing problems and a facility that was unprepared for an outbreak of a highly-contagious virus.

The situation at the Holyoke Soldiers' Home was cast in new light Thursday when the suspended superintendent challenged Baker's timeline of events and the governor's suggestion that the home was not in proper contact with the administration.

Bennett Walsh was placed on paid administrative leave and the facility put in the hands of an outside administrator and a clinical command team last Monday after the deaths of 11 residents became public. The governor and Holyoke Mayor Alex Morse previously suggested that Walsh and the Holyoke home did not inform the state of problems there until it was too late, and on Wednesday the governor said there was a “lack of follow-through on standard protocols with respect to reporting” at the Holyoke Soldiers' Home.

In a two-page statement released through an attorney Thursday, Walsh detailed the instances in which he said he informed the state of veterans showing symptoms of COVID-19 and was denied assistance by the administration.

“There have been widespread reports in the media that state officials were kept in the dark about what was happening at the Soldiers' Home during the Covid-19 crisis. These reports are false,” Walsh said in his statement.

“We provided updates on a daily basis, sometimes multiple times a day. These updates were by phone, text, email, conference calls and official report forms. These updates were made at various times to the staffs of the Secretary of Veteran Services (DVS), the Executive office of Health and Human Services(EOHH)and the Department of Public Health(DPH).”