Pioneering Female Infantry Marine Kicked Out Of The Corps For Fraternization

The career of one of the first female infantry Marines has come to an ignominious end after she admitted to... 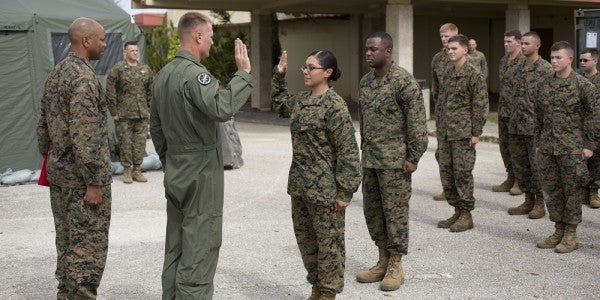 The career of one of the first female infantry Marines has come to an ignominious end after she admitted to having a romantic relationship with a Marine under her command whom she later married, Task & Purpose confirmed on Wednesday.

Cpl. Remedios Cruz has been reduced in rank from sergeant and will be separated from the Marine Corps per an agreement negotiated with prosecutors that allowed her to avoid a court-martial on charges of fraternization, adultery, and accessory to larceny,the New York Times first reported on Wednesday.

Cruz's Article 32 pretrial hearing officer had recommended that she be punished administratively, but her battalion commander instead recommended that her case go to trial,  II Marine Expeditionary Force spokesman Maj. Rob Shufford told Task & Purpose on Wednesday. Before the charges could be referred to a court-martial, Cruz and her attorney reached the pretrial agreement.

Cruz was one of the first three female infantry to join the Marine Corps, the New York Times reported. She joined 1st Battalion, 8th Marines in January 2017. She told the New York Times, “The biggest mistakes I’ve made in the infantry were from my personal relationships. I really want to move on.” (Task & Purpose was unable to reach Cruz for comment on Wednesday)

Related: Marine Grunts On The Corps’ First-Ever Female Infantry Leader: ‘She’s One of Us’ »

For Daniel Conway, Cruz is a civilian defense attorney who represents service members facing courts-martial, this case raises questions about why Cruz’ commander recommended she appear before a court-martial even though the pretrial hearing officer reportedly found no probable cause for the larceny and adultery charges and recommended she receive administrative punishment.

“This Marine is now under immense pressure to accept a discharge to avoid a court-martial in the kind of case where we've seen senior officers get far less punishment for far more serious offenses,” Conway, a former Marine captain, told Task & Purpose on Wednesday. “This is exactly why critics of the military justice system are trying to strip commanders of discretion.”

But retired Marine Lt. Col. Kate Germano, who detailed her experience in charge of the Corps’ only training battalion for female recruits in Fight Like a Girl: The Truth Behind How Female Marines Are Trained, told T&P; that she does not feel that Cruz was singled out.

“Based on the [New York Times] article, she was in a position of authority and was senior to the Marine,” Germano said. “We teach enough in boot camp about fraternization that she knew she was wrong. While it is interesting how many men have not been prosecuted for the same offense, her commanding officer was right in saying her actions were disruptive to good order and discipline.

“While it is disappointing in many ways, it isn’t to be unexpected that these things will occasionally happen— regardless of the type of unit. It’s a tough position for her CO to be in because he would be criticized regardless,” she added. “As long as he consistently makes the same recommendations for the same offenses, he will be doing the right thing.”

While traveling to India last week, T&P; asked Defense Secretary James Mattis if he was satisfied with the progress of integration women into Marine Corps and Army infantry units.

“It’s probably too early to talk about progress because the numbers are so small,” Mattis said on Sept. 4. “I think you need a larger cohort before you can evaluate something like that. Can’t make broad assessments based on very, very few numbers.”