Hey! You Shouldn’t Address A Bunch of Marines As ‘Gentlemen’ When the Group Includes Female Marines 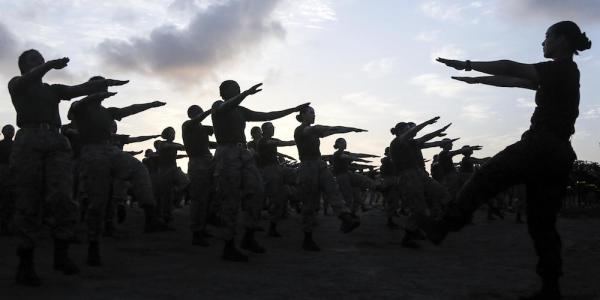 As a brand new lieutenant to the fleet, I was shocked standing in formation when my commanding officer began by addressing the unit as “gentlemen.” I was not the only woman in my unit and there have been women serving in my unit for years. He knew I was there, but it seemed as if my presence was being disregarded. A commanding officer is responsible for setting the tone of the entire unit and, without words, he made women feel unwelcome.

Leaving out “ladies and” is so subtle that it is often overlooked. Language is one of a commander’s many powerful tools to influence change and reach every member of the unit. The words and opinions leaders choose to communicate are reflected in the Marines under his or her charge. Marines will take on the persona of their leadership and they will hear what is said and what is implied by what is not said. Each rank and level of leadership has their own sphere of influence beginning with a Private First Class utilizing the proper greeting of the day all the way up the chain of command to a Sergeant Major and a Lieutenant Colonel addressing a battalion.

The Marine Corps has an uncomfortable relationship with women serving in their ranks. The service was the only one to request an exemption from the lifting of the Ground Combat Exclusion Policy, and conducted a multimillion dollar study to prove that women couldn’t hack it in combat jobs. With the highest ranking decision makers publicly trying to keep women out and spending large amounts of taxpayer dollars to do so, equality has not been possible. Over the course of the last year, the service has continued to be troubled by failure to tamp down on nonconsensual photo sharing, as originated in a Facebook group called “Marines United,” which had over 40,000 members, including several active duty members.

When rank and situation permit, I have been able to address the men who forget to say “ladies.” It has been very uncomfortable exposing myself as vulnerable. The response I often hear is that the man has never worked with a woman. This is absurd. Men and women work together our whole lives. Starting from the time we meet on the playground, through school, college, previous jobs, and in the household.

This year marks 100 years of women in the Marine Corps. For the Marines who served their entire career in units with only men, the habit of only saying “gentlemen” must be broken. Words matter. Women make up 8% of the Marines Corps, which means we do not have as many seats at the table. Without men as allies and advocates of females, change will never occur.

As a woman in an artillery battalion of approximately 800 Marines, with less than ten other females, I was fortunate to have had a platoon sergeant who had worked with women his entire career. He chose to use humor to address these types of situations. His humor was my voice when I felt powerless and disregarded. His tactics often made people realize their mistake in a comfortable setting. Unfortunately, since he was addressing another man, it carried more weight than if I, as a women, had addressed the situation.

I offer a solution to a small problem that I believe can begin the change that the Marine Corps needs. If “ladies and gentlemen” is too long or difficult to remember, I offer “Marines,” “Warfighters,” a unit’s call sign, or just the greeting of the day. If not, we will continue sending the message to our Marines and future leaders that women are not yet equal in our Corps.

1stLt Virginia Brodie is a Marine artillery officer currently serving in 11th Marine Regiment. She is a graduate of the United States Naval Academy. She recently returned from a Unit Deployment Program where she served as a Company Fire Support Officer in support of artillery and infantry operations. The views and opinions expressed are her own and do not represent the views of the U.S. Government.