CAMP PENDLETON – Sgt. Margarita Palli, an instructor at the Marine Combat Training Battalion, knew early on who her platoon... 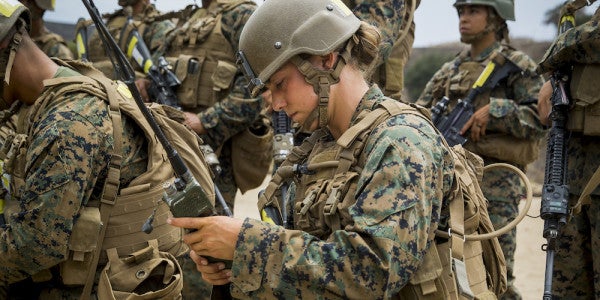 CAMP PENDLETON – Sgt. Margarita Palli, an instructor at the Marine Combat Training Battalion, knew early on who her platoon standout would be.

Palli was hiking mid-pack when she looked around to see how her Marines – new students in the 28-day course – were doing on the day’s 10K hike.

There was exhaustion in their faces, heavy breathing and groans of pain as they lugged 60-plus-pound backpacks up a steep and dusty hill.

“I saw this female and she was very stoic,” said Palli. “She just walked, no complaining, no nothing. I was like, ‘OK, I’m going to keep an eye on her.’”

Pfc. Sara Durst continued to excel and Palli kept hearing other Marines in the platoon praise her.

“I kept hearing her name during field week and during range week,” Palli said. “The other Marines kept telling me she should be a squad leader.”

Palli promoted Durst to that position. It was Durst’s job to make sure the Marines had all their gear and water. She did so well that first week in training that Palli made her the guide of the entire platoon.

“She became my right hand,” Palli said. “She was absolutely natural. It stood out how well she could handle the platoon.”

Durst, 26, of Reedsburg, Wis., was one of 58 females among a recent graduating class of 326 at Camp Pendleton’s Combat Training Battalion, finishing at the top of her class.

She also is among 469 female Marines making history at Camp Pendleton as the first to take on combat training with their male counterparts at the Marine Corps base.

They have gone through the combat course, which includes basic combat training, patrol and convoy, marksmanship using grenades and launchers and grueling 5-, 10- and 15K hikes through the hilly terrain that surrounds the seaside base. Of those 469 women, 406 have graduated.

The shift has been evolving quickly since March, when Camp Pendleton’s School of Infantry West opened its historically male-only combat training battalion to women. For the first time in Marine Corps history, female Marines recruited from west of the Mississippi are training for combat at Camp Pendleton instead of at Marine Corps Recruit Depot Parris Island, S.C., where female Marines have traditionally been trained.

Training at Camp Pendleton differs from that at Parris Island in climate and terrain. In South Carolina, Marines fight high humidity and bugs. Hikes are flat and circular. At Camp Pendleton, the terrain is rugged and Marines climb dry and dusty hills.

Related: Marine Grunts On The Corps’ First-Ever Female Infantry Leader: ‘She’s One of Us »

The Marine Corps is the only military service branch to train all Marines to handle weapons and fight, regardless of their specialties. Female Marines train alongside men and are fully integrated at the platoon and squad levels.

“We train for certainty and educate for uncertainty,” said Brig. Gen. Jason Bohm, who was in command and oversight of the gender-integration elements at Marine Combat Training Battalion and oversaw the Marine Corps Training Command headquartered in Quantico, Va. “No matter how the Marine Corps fights in the (future) or how technologically advanced we become, we never forget the human element.”

In boot camp, Marines are transformed through basic training from civilians into Marines. In combat training, they learn about war-fighting and develop a bond and warrior ethos that is part of the Marine Corps mystique.

“The warfighter of tomorrow is a flexible problem-solver,” Bohm said. “The character of war has changed but the nature of war is enduring. We train to operate and thrive in those environments. They (Marines) are not going to freeze when something happens.”

Lt. Col. Brian O’Shea, who trained with women when he entered the U.S. Navy in 1995, recently took command of the battalion. Males training with females, he said, won’t interrupt the nature of the training or the battalion’s timeline.

What has changed since the ’90s, he said, is adding gear to fit typically female frames. Flak jackets are being designed for breasts; helmets are being made smaller; packs have retractable frames to prevent injuries to females’ backs and hips.

In addition, housing, medical services and bathroom facilities have been added to accommodate females at the School of Infantry West.

Before a recent combat training graduation parents, relatives and friends of Marines gathered in a building on the School of Infantry West campus to get a glimpse into what their Marines had gone through. Sgt. Major D. V. Velis Jr. gave a brief presentation.

At the graduation ceremony, O’Shea called out Durst as the company’s honor graduate and presented a challenge coin in acknowledgment of her achievement.

“In the last 29 days, one of you stood out more than the rest,” he said to Durst.

Changes in the Marine Corps

Opportunities for female Marines began evolving significantly in 2013, when then-U.S. Secretary of Defense Leon Panetta lifted the ban on women in the infantry. By doing so, he overturned a 1994 Pentagon ruling preventing females from holding jobs in artillery, armor and other infantry specialties.

But in January 2016, Secretary of Defense Ash Carter announced that all gender-based restrictions on military service were lifted, clearing the way for women to serve next to men in infantry roles. Three months later, Marine Corps officials announced all Marines would fall under the same policies. There are now 33 previously closed specialties open to female Marines, Bohm said.

Over the past 12 months, in particular, there have been a series of glass ceiling-shattering events.

In September 2017, Lt. Maria Hierl became the first to graduate from the grueling 13-week Marine Corps Infantry Officer Course and reported to the 1st Marine Division at Camp Pendleton.

On June 22, 2018, Lt. Col. Michelle Macander became the first female leader of a ground combat arms unit when she took command of the 1st Combat Engineer Battalion at Camp Pendleton.

“Female Marines are seen as Marines, not as females,” Bohm said. “They’re measured by their contribution to their unit, not by their gender.”

“The only thing that concerns me is the physical aspect,” she said. As an example, Palli referenced a female Marine who wanted to be a mortarman, but needed a step-stool to reach the cannon.

“I believe there should be certain weight and height requirements,” said Palli, who at 5-foot-5, 125 pounds, is the Marine Corps’ first female mortarman.

“Being in the infantry is a difficult task,” she said, recalling her previous assignment. “The pain unites us. We did everything together. We ate together, slept together and went out together.”

Initially, Palli said, male Marines were resistant to female integration. But as time went on, that changed.

“It was like, she’s just another bro,” Palli said. “It’s not a big deal unless you make it a big deal.”

Earlier this year, Palli was sent to Camp Pendleton to help with female integration. She is one of seven women in a group of 122 combat instructors. Palli’s first class was all male – when she got her first females, she noted many of them were more serious than the males about their training.

Recently, when Pfc. Alicia Matias, 23, of Los Angeles, also a July graduate, said the men tended to be less mature than the women, Palli readily agreed.

“You have 17- and 18-year-old boys and they see girls and they get immature,” she said. “But, they’re also very willing to help the girls. If anything, they actually try harder for the girls. It’s better for us because it’s a win-win situation. The girls also know how to shut them down.”

For Durst, it wasn’t a gender issue. There was just something about her that made others in her platoon and squad respect her, Palli said. Taking her training seriously was definitely one element.

“I wanted to become a better version of myself and wasn’t living up to my expectations,” she said, adding that she managed a gym and coached the Badger Lightning girls youth hockey team in her small Wisconsin farming town.

Durst’s brother had joined the Marines and when he returned home on leave, she recalled, he had been transformed. He had become a Reconnaissance Marine.

“When I first saw him, he whispered in my ear that I should join the Marines,” she said. “He told me I’d like the leadership aspect. He sold me and I contacted his recruiter.”

Once in, the 5-foot-8 Durst loved the physical challenges that boot camp presented. She particularly enjoyed hiking the hills.

“When you get to the top of the hill and see the beautiful view, it’s all worth it,” she said. “There were certain hills where I thought, ‘Oh my gosh, we have a ways to go,’ but my inspiration came from the fact that my brother was here and that if he can do it, I can.”

When it came time for the combat instructors to select a Marine to be specially recognized, it was an easy choice, Palli said.

“They say you can fake motivation but she was real,” Palli said of Durst. “Students felt that and fed off that. She was leading from the front.”

What surprised Palli was the reaction of the male Marines to Durst’s honor.

“I would have thought the guys would have been a little bit more hurt,” she said. “Everyone knew – she was the one.”