A Handful Of Female Marines Just Made History At Camp Pendleton 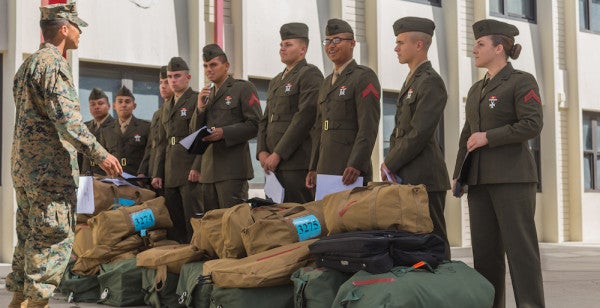 The recent graduates of Marine Corps Recruit Depot Parris Island will be the first enlisted female students to learn basic battlefield skills at what’s called “MCT-West,” part of Camp Pendleton’s School of Infantry. The group is expected to grow to 40 women in the next few days.

In the past, they went to Camp Lejeune in North Carolina, but the new Marine Corps policy will send all female boot camp grads recruited from states west of the Mississippi River to Camp Pendleton.

Tuesday’s arrivals were assigned to Golf Company, Marine Combat Training Battalion. They will be integrated fully with male Marines for the duration of the 29-day course, just like they are in North Carolina, according to Training Command spokesman Capt. Joshua J. Pena.

“Neither the course nor the training calendar will be altered at all because of this,” Pena said.

Related: All Marines Will Have To Take And Pass A New Battle Skills Test Starting 2018 »

The first woman to report to MCT-West was Pfc. Kira Kozik and the second was Pvt. Nathalie Lizama. But they won’t be the first Marines to arrive at the campus for infantry training.

When the Pentagon opened up the infantry ranks in 2016, several women went through the School of Infantry’s Infantry Training Battalion, a separate and grueling 59-day course for Marines chosen to serve in rifle squads or join machine gun, mortar, anti-tank weapon or Light Armored Vehicle-25 crews.

MCT is for non-infantry Marines. Their training includes learning the basics of combat marksmanship, how to react to roadside bombs, lifesaving medical care and other skills. With the credo “every Marine a rifleman,” the Corps wants to ensure that men and women are training together because they might have to fight together, too.

“This initiative is part of a Marine Corps effort to enhance the entry-level training program for all Marines and to better reflect how the Marine Corps is structured in the operating forces,” Pena said.

“The Marine Corps will continue to send women to Parris Island,” Pena said. “The current number that we recruit is supportable at Parris Island. If we reach a number above what we’re recruiting now, that’ll be on the table, to open up San Diego.”

U.S. Marine Pfc. Kira Kozik, the first female Marine student to check in to School of Infantry – West, stands in line to turn in her medical records on Camp Pendleton, March 6, 2018. This marks the first male-female integrated Marine Combat Training company on the West Coast.

Critics have argued that segregating boot camp by gender sends a bad message to both male and female Marines. It tells women that they’re not as tough as the men and it teaches male recruits that female Marines can’t hack it, they say.

“You can see the hypocrisy here, the absolute hypocrisy,” said retired Marine Lt. Col. Kate Germano, a former commander of the female-only Fourth Recruit Training Battalion at Parris Island and a longtime advocate for opening up all Marine training to women.

“The reality is that recruiting is capped at 3,400 women because of space limitations at Parris Island. If they moved into other facilities and got more space, they could recruit more women. They could take over a squad bay in San Diego and move women in there.

“It hasn’t happened already because they don’t want it to happen.”

Congress might take notice, she added. A woman recruited in San Diego will fly to South Carolina for boot camp, then back here for MCT then possibly back to an eastern state for advanced schooling or to join a unit there, hiking costs for the taxpayer.

Women make up about 9 percent of the Marine Corps, the smallest percentage of female service members in all of the armed forces. The percentage in the Navy is twice as large, although the Marines want to raise it to 10 percent.

Women comprise about 15 percent of the entire active-duty force in the military.