This Supreme Court ruling helps the military avoid accountability for harming troops. That could soon change

For decades, the Feres Doctrine has shielded the military from lawsuits over training mishaps, medical malpractice, and sexual assault. 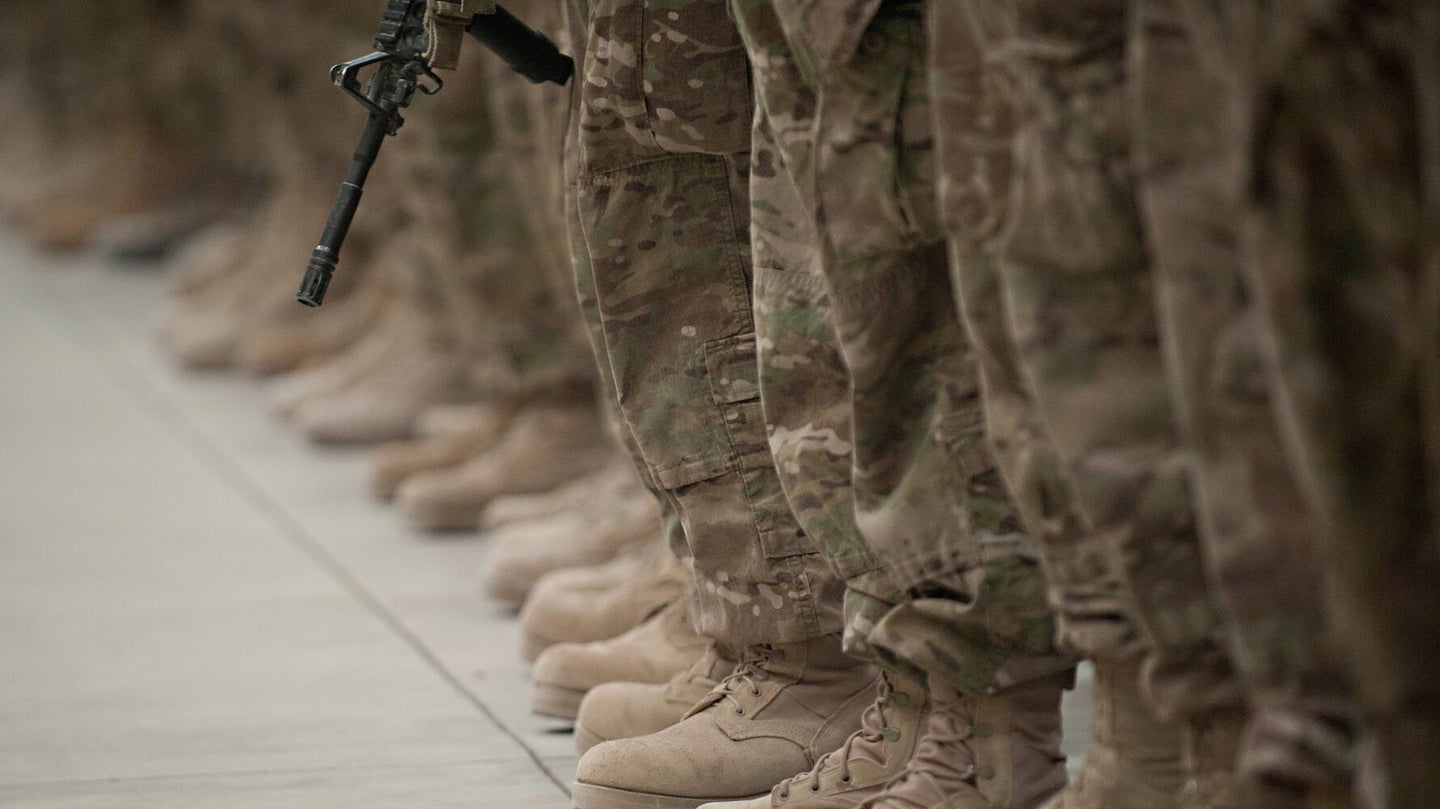 This article first appeared on The War Horse, an award-winning nonprofit news organization educating the public on military service.

On the nine-hour drive from their home in California’s central valley to the Marine Corps’ Camp Pendleton, south of Los Angeles, Peter Vienna and his wife wondered what had happened to their son. They knew only that there had been a training accident. Their 22-year-old son, Christopher Gnem, was involved.

Gnem had enlisted in the Navy three and a half years earlier. After training as a corpsman—a medic—he’d embarked on a career path serving alongside Marine rifle teams.

“He chose to go ringside,” Vienna says. “He could have stayed stateside and just worked in hospitals. He didn’t have to go on that training.”

They had been training near San Clemente Island, west of San Diego. Teams of Marines, along with Navy corpsmen, had practiced maneuvering amphibious assault vehicles ahead of an upcoming deployment. Gnem’s AAV, Vienna learned when he made it to Camp Pendleton, had taken on water. It eventually sank to the bottom of the ocean with eight men trapped inside. Gnem was among them.

Vienna and his wife stayed at Camp Pendleton for several weeks while the Marine Corps confirmed their son had died inside the assault vehicle and wasn’t missing at sea. Then the Corps brought in specialized equipment to recover the AAV and the bodies inside that rested nearly 400 feet below the ocean’s surface.

At first, Vienna and his wife thought it was just a tragic accident. But then they began to hear rumors.

“We started hearing 40-year-old vehicles were supposed to have been taken offline years ago,” Vienna says. “We were starting to hear little bits and pieces of things that have come out. We knew that something was wrong, but we had no idea how deep it went.”

Vienna and his wife didn’t learn the extent of the failures that led to Gnem’s death until seven months later, when the Navy released a report that found extensive deficiencies in training, equipment, readiness, protocols, and leadership led to the incident. The decades-old AAVs used that day were later found to have multiple mechanical deficiencies. There was no safety boat onscene. Gnem hadn’t completed the basic swimming qualification that should have preceded training on the open ocean, and only two of the 13 people in his vehicle had fully completed the required underwater egress training.

Vienna and some other family members of Marines who died that day sued the maker of the assault vehicle. But Vienna can’t sue the party he views as most responsible for his son’s death: the United States Marine Corps. A 72-year-old legal principle known as the Feres doctrine shields the military and the government from lawsuits brought on behalf of service members injured in the course of their service. For decades, the doctrine has protected the military from lawsuits over things like training mishaps, medical malpractice, and sexual assault.

Over the years, courts have upheld and expanded the Feres doctrine, even as service members and advocates say it prevents the military from having to take responsibility and make changes that could keep troops safer. But last month, the Ninth Circuit Court of Appeals ruled against the government’s Feres defense in a civil lawsuit that alleged sexual assault, with a judge writing that the alleged assault could not “further any conceivable military purpose.”

While the ruling can be appealed, it marks a departure from decades of courts doubling down on the Feres doctrine.

“It’s the first time in a long time where the courts have taken a hard look at Feres and rolled it back and said that it needs to be limited in its scope,” Dwight Stirling, the founder of the Center for Law and Military Policy and a law professor at the University of Southern California. “Why, when you wear the uniform, do you get lesser rights in terms of getting to court than those who don’t wear the uniform?”

‘There’s a risk of undermining discipline’

Lt. Rudolph Feres, the doctrine’s namesake, returned from World War II a hero. He’d parachuted into Normandy on D-Day and came home wearing three Bronze Stars. Two years later, he died when an early morning fire tore through the barracks at Pine Camp, now Fort Drum, in New York. The wives of the men who were killed sued the government for allowing their husbands to sleep in a barracks with a faulty heater. When the case was dismissed, Feres’ wife appealed to the Supreme Court.

Around the same time, two other cases were working their way through the judicial system, both involving soldiers who had been victims of botched surgeries while in the Army. In one case, civilian surgeons pulled a 30-inch-long towel from inside a man’s abdomen. The towel was stamped “Medical Department U.S. Army.” Both cases alleged that Army doctors had been negligent.

In 1946, the Federal Tort Claims Act opened the door to lawsuits against the government in cases of negligence or wrongdoing. But the act exempted claims resulting from combat.

“There’s a risk of undermining command and control or discipline in the military if you allow folks to sue their commanders for bad decision-making,” says Rachel VanLandingham, a law professor at Southwestern Law School and the president of the National Institute of Military Justice.

In 1950, the Supreme Court combined the three lawsuits and issued a ruling extending that exemption to peacetime. Under the Feres doctrine, military members cannot bring a claim against the government or the military for wrongs incurred in the course of their military service.

That has led to a broad interpretation of the phrase. Over the decades, the Feres doctrine has protected the government against claims from soldiers exposed to nuclear testing and secret LSD experiments, as well as victims of medical malpractice and sexual assault. CPT Katie Blanchard has been unable to recover damages from the government after a co-worker doused her in gasoline and set her on fire in 2016—after she says she had detailed his threats against her to her command and asked to be separated from him.

There has been one significant shift: Following years of lobbying, in 2019, Congress agreed to a change. The 2020 National Defense Authorization Act included a provision allowing military members not to sue the government, but to file claims for injury or death as a result of medical malpractice by military doctors. The bill was called the Sergeant First Class Richard Stayskal Military Medical Accountability Act, after Stayskal’s stage IV lung cancer was misdiagnosed as pneumonia by doctors at Fort Bragg. By the time a civilian doctor found the cancer, it had spread to other organs. But advocates say the new process is bogged down with bureaucracy; almost no one—including Stayskal himself—has received a payout.

In April of 2019, now-retired Col. Kathryn Spletstoser filed a complaint with the Air Force alleging that Gen. John Hyten, whom President Donald Trump had just nominated for vice chairman of the Joint Chiefs of Staff, sexually harassed and assaulted her while they worked together at U.S. Strategic Command. An Air Force investigation found insufficient evidence to charge Hyten but did not make a determination of guilt or innocence. Following the investigation, Spletstoser sued Hyten, who has denied the allegations.

The government moved to dismiss the case based on Feres. But in October of 2020, the Central District Court of California ruled in favor of Spletstoser. In the lawsuit, Spletstoser describes an incident in which Hyten allegedly assaulted her while the two traveled together. The court held that the incident, which Spletstoser said occurred in a civilian hotel room while she tried to get ready for bed, could not be considered “incident to military service.”

“Regardless of whether General Hyten came to Plaintiff’s hotel room under the pretense of work-related purposes, it is not conceivable that his military duties would require him to sexually assault Plaintiff, or that such an assault would advance any conceivable military objective,” the court wrote.

Last month, the Ninth Circuit Court of Appeals upheld the lower court’s decision. Hyten’s lawyers can still appeal to the Ninth Circuit for an “en banc” ruling, which means the entire bench would consider the case, rather than the three-judge panel that issued last month’s ruling, VanLandingham says. But the advocates for reforming Feres see the ruling as a critical milestone.

“The military is now the largest employer in the world, and Feres has essentially been treated as a complete bar to suing for service members,” says Lindsey Knapp, the executive director of Combat Sexual Assault, which works to support military sexual assault survivors. “I think this is a huge deal.”

Hyten’s lawyers may also appeal to the Supreme Court, although it’s unclear if the court would agree to hear it. If they don’t, Spletstoser’s lawsuit can proceed. Even if the Supreme Court does accept the case, the ruling casts the government’s position in an uncomfortable light, Knapp says.

“The military argued that sexual assault was essentially a part of your military service,” Knapp says.

Last year, the Supreme Court declined to hear the case of a Jane Doe who sued West Point and its leadership for creating an environment that permitted her sexual assault when she was a cadet. The Second Circuit held that her claims were barred by Feres, and the Supreme Court let that decision stand. But Justice Clarence Thomas wrote a dissent arguing it was time for the highest court to revisit Feres.

“Under our precedent, if two Pentagon employees—one civilian and one a servicemember—are hit by a bus in the Pentagon parking lot and sue, it may be that only the civilian would have a chance to litigate his claim on the merits,” Thomas wrote. “Feres was wrongly decided.”

Knapp is recruiting lawyers willing to bring similar cases in the Ninth Circuit and elsewhere to try to turn the legal tide. But she and others believe that if Feres is to be overturned or rolled back, the clearest recourse is not through the courts, but through Congress, as was the case with medical malpractice.

“The ultimate way to end the Feres doctrine is by an act of Congress,” Stirling says. He sees the government’s argument that Spletstoser’s alleged assault was part of her service as an opportunity to shed light on how the doctrine has been used. “The hope is that with more attention on Feres and the harm it does, especially in the realm of sexual assault, that Congress will kind of reconsider why we have this doctrine and the harm it does to our service members.”

The recent court ruling doesn’t directly help the families of Marines who died at Camp Pendleton in 2020. Stirling had to break the news to Vienna and others. “They were kind of heartbroken,” he says.

But Vienna says any ruling that calls attention to the doctrine he sees as preventing him from pursuing justice for his son is important.

“There’s no accountability in the military because of this protection,” he says, but the ruling  is “a chip in the armor.”

This War Horse feature was reported by Sonner Kehrt, edited by Kelly Kennedy, fact-checked by Ben Kalin, and copy-edited by Mitchell Hansen-Dewar. Headlines are by Abbie Bennett.