National headlines for the past several days have focused on the quiet suburb of Ferguson, Missouri, and its police force... 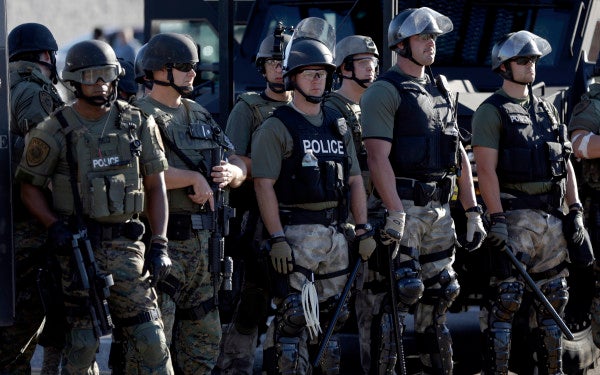 National headlines for the past several days have focused on the quiet suburb of Ferguson, Missouri, and its police force is under intense scrutiny for its actions this week.

This has prompted Missouri Gov. Jay Nixon to remove Ferguson police from command of the situation and give control of the crowds to Missouri State Troopers in a statement this afternoon.

Little is known about the death of Brown, due in no small part to the lack of transparency by authorities in Ferguson and St. Louis county. What we do know is that he was unarmed and only 18 years old. Police have yet to release the identity of the officer who shot him, which should be public information. They won’t even release crucial details from the autopsy report, like how many bullets struck him, which should also be public information. Reports state that authorities have been slow to interview key witnesses and slow to meet with Brown’s family.

The outrage over Brown’s death sparked protests and riots, laying bare longstanding tensions between the predominantly black community and a police force with a remarkable lack of diversity.

Indeed, in a community that is 68% black, the mayor and police chief are white, and more than 94% of the city’s police force is white.

According to data from the Missouri attorney general’s office, although blacks comprise less than 70% of the population, they made up of 86% of all individuals stopped by the police, 92% of all people searched by the police, and 93% of all arrests.

This disparity reflects deep racial division between a population and its police force that is tough to stomach in 2014. But beyond the startling examples of racial tensions in modern America lies a story of the danger that exists when small-town cops get their hands on big-time military gear.

As Business Insider’s Paul Szoldra points out in this great write-up, the response of Ferguson’s police force to the unrest in the streets shows the stunning militarization of America’s police.

Police are rolling in war gear with heavy-duty weapons, armor, tear gas, gas masks, and more ammunition than they would ever need in an American community.

The gentleman on the left has more personal body armor and weaponry than I did while invading Iraq. pic.twitter.com/5u6TxyIbkk

One thing that makes these cops in their war gear tough to take seriously is their uniformity. In actual war, guys know what they like on their gear when they go out. Some strip down their rifles completely, some go with a broomstick handle, some use a bipod. Few guys in the military wear two knee pads. When you kneel, you only usually put down your dominant knee. Why would you ever need to go down on two knees? And for that matter, why would Ferguson police need to kneel at all?

The cops don’t know what they’re doing. They’re playing dress up, but with real bullets and with real lives.

Recent images have even shown police aiming weapons indiscriminately at the crowd.

A member of the St. Louis County Police Department points his weapon in the direction of a group of protesters in Ferguson, Mo. on Wednesday, Aug. 13, 2014. On Saturday, Aug. 9, 2014, a white police officer fatally shot Michael Brown, an unarmed black teenager, in the St. Louis suburb.AP Photo/Jeff Roberson

Images also show police driving in up-armored mine resistant vehicles, designed to sustain heavy AK-47 fire and roadside bombs. When asked why, Ferguson police chief Tom Jackson said, “People are using bombs now, pipe bombs and so forth.” So forth was presumably a reference to Molotov cocktails. But of all the images we've seen in Ferguson — images of police in riot gear and tear gas canisters, posted by journalists from top news outlets or just citizens with a camera — I haven't seen one image of a Molotov cocktail or pipebomb.

And even if those images did exist, police began their efforts with the armored vehicles and full military gear from the outset, it was not a reaction to anything.

Last night, watching the news coverage unfold, I traded tweets with Don Gomez, a Task & Purpose contributor who is in the midst of a combat pump to Afghanistan as a U.S. Army infantry officer.

“What's it like for you to watch this unfold from Afghanistan?” I asked him.

He replied with a quote from the film Full Metal Jacket.

“These are great days we’re living, bros. We are jolly green giants, walking the Earth, with guns. These people we wasted here today are the finest human beings we will ever know. After we rotate back to the world, we’re gonna miss not having anyone around that’s worth shooting.”

But in the world that awaits Gomez’ rotation back home, the world in the St. Louis suburb of Ferguson, police don’t have people around who are worth shooting, either. But that’s not stopping them.

There are reports of police telling journalists, “You guys are in the middle of a war zone.”

There is also a CNN video that captured a Ferguson police officer yelling at the crowd,”Bring it, all you fucking animals! Bring it!”

The ironic thing is that if these guys were real soldiers, in a real warzone, in the modern military trained to conduct counterinsurgency operations, they wouldn’t do any of this shit.

As Szoldra notes, “If there's one thing I learned in Afghanistan, it's this: You can't win a person's heart and mind when you are pointing a rifle at his or her chest.”

Journalist Anil Dash tweeted a great summation of what police in Ferguson are doing wrong: