Editor’s Note: This article by Gina Harkins originally appeared onMilitary.com, the premier source of information for the military and veteran community. The... 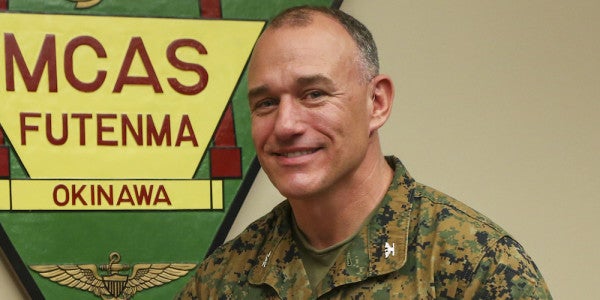 The ousted commander of a Marine Corps air station rearranged his pilots' flight schedules to give himself more time in the cockpit and had a reputation of being a “big, angry colonel,” according to an investigation into complaints about him.

Col. Mark Coppess, the former commanding officer of Marine Corps Air Station Futenma in Okinawa, Japan, abused his staff and officers for months “so he could achieve his personal objectives to fly,” a 351-page report into his behavior states. A copy of the investigation was obtained by Military.com on Monday.

Coppess was relieved of command June 5 by Brig. Gen. Paul Rock, head of Marine Corps Installations Pacific. Rock lost confidence in the colonel's ability to lead, the service reported at the time.

Some believed Coppess, an AH-1W Super Cobra attack helicopter pilot, was aggressively trying to earn flight time in a UC-35 Cessna Citation business jet. Coppess, who could not immediately be reached for comment, requested that he be scheduled to fly three times per week, according to the investigation.

“Colonel Coppess would remove pilots from the flight schedule and replace them with himself,” one witness said, according to the documents. “… This looked like Colonel Coppess was trying to receive more fixed-wing time to set himself up for a career post-Marine Corps.”

One witness said Coppess put his own time in the cockpit ahead of more junior pilots, adding that the colonel once said, “The captains can fly less. I've done my time.”

Others cited a poor command climate under Coppess and alleged abuse of authority and undue command influence. Five pilots interviewed during the investigation reported “personally being pressured to produce certain outcomes not in accordance with orders, and directives” for Coppess' benefit.

“He creates an atmosphere of fear and reprisal,” a witness told the investigating officer. “He is using his position, title, and rank to get what he wants for himself.”

Coppess denied using his position to unduly influence flight operations at Futenma, but acknowledged that he'd heard about the accusations from Rock.

A former operations officer at Futenma said scheduling staff had to route the weekly flight schedule through Coppess' office before producing the daily schedules.

“He inserted himself into the schedule writing process,” the officer said. “… There is a perception of a 'self hook-up' concerning Col. Coppess' flying.”

Coppess also told his Marines there was “no rank in the cockpit.” But those under his command didn't always find that to be the case.

The colonel showed an unwillingness to accept constructive feedback from junior personnel, one witness said, adding they feared some might be unwilling to “correct procedural deviations and potential flight safety concerns due to apprehension about retribution from Col. Coppess.”

Pilots weren’t comfortable flying with Coppess, according to the investigation, and he was identified as a “high-risk aviator.” He had a reputation for being “difficult in the cockpit,” one witness said. Others said he was not experienced flying a fixed-wing aircraft.

Coppess once “rose his flaps at a non-standard time,” according to a witness, and on another occasion “warmed a burrito on the exhaust duct of the aircraft.”

While there aren't any Naval Air Training and Operating Procedures Standardization [NATOPS] prohibiting pilots from doing either, the witness said the acts were considered “different enough” for the aircraft commanders to raise the issue to a party whose name was redacted in the report.

Coppess did not address those incidents in the investigating officer's documents, but did say that he supports naval aviation's constructs for safety and standardization.

In a memo for a May command meeting, he urged other aviators to be straight with him about his aviation skills, despite his rank and position. The memo was included in the investigation, though it's not immediately clear whether the meeting was held.

“It will help me in knowing and owning my weaknesses and seeking improvement,” Coppess wrote in the meeting memo. “… I fully intend to know and own my shortcomings as an aviator.”

Despite the deficiencies some witnesses described, several people told the investigating officer that Coppess was pressuring people in the command to make him a Transport Aircraft Commander, or TAC. One in particular said he was under “constant pressure” to make Coppess a TAC in the UC-35D.

“[He] is not ready and is a below-average copilot,” the witness said. “I was specifically told by him a few months ago that he will be a TAC, will be dual , and that he will be an instructor in at least one of the planes.”

Coppess addressed those issues in an April 27 letter that was included in the investigation. Writing to a redacted party, Coppess said he recognized the standardization board's role in nominating pilots for additional designations and qualifications. He did “not intend to influence members of the Standardization Board in their responsibilities,” he wrote.

“I apologize for the unintentional perception of undue command influence on the role of nominating pilots for designations and qualifications,” he said. “That won't happen again. When the determines I've progressed in proficiency and I'm nominated, I will be ready for the TAC syllabus.”

He also invited the person to bring any fears of reprisal to his attention.

While at Futenma, Coppess racked up more flight hours than any other air station commanding officer in the Marine Corps during the same period, according to the investigation. His command did not immediately respond to questions about his current assignment.