For the first time in history at Fort Benning, four women were among 162 soldiers who graduated Thursday from the... 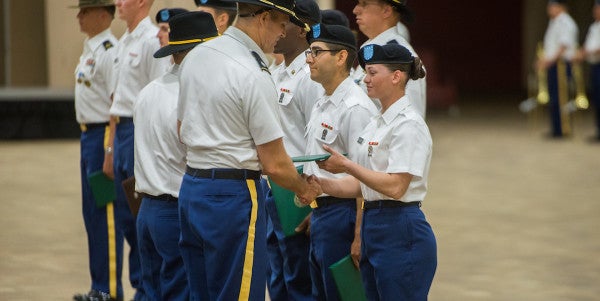 For the first time in history at Fort Benning, four women were among 162 soldiers who graduated Thursday from the Cavalry Scout One Station Unit Training.

The soldiers of the 5th Squadron, 15th Cavalry Regiment completed the 17-week training and earned the Military Occupational Specialty of 19D, Cavalry Scout during a ceremony at Freedom Hall. As part of gender integration, the four women will continue their jobs at the 1st Cavalry Division at Fort Hood, Texas, and the 82nd Airborne Division at Fort Bragg, N.C., said Nate Snook, a public affairs spokesman at Fort Benning.

On the battlefield, the cavalry scout is considered the commander’s eyes and ears. Scouts are called on when information about the enemy is needed. They are also responsible for reconnaissance and are proficient with various weapons, including explosives and mines. In the field, scouts make contact with the enemy using anti-armor weapons and vehicles.

Each soldier was held to one standard throughout the training, said Col. John Cushing, commander of the 194th Armored Brigade. “We spent a great deal of time making sure that we were ready to accept females into our formation,” he said. “Female drill sergeants were on board for about 18 months prior to the execution, which prepared us for the integrated training.”

Lt. Col. Daniel C. Enslen, commander of the 5th Squadron, 15th Cavalry Regiment, said the soldiers’ success is a testament to their perseverance and the foundation each helped to establish.

“This ceremony marks a key milestone in the life of your soldier,” Enslen said to family and friends at the graduation. “Today, they graduate as cavalry scouts trained in the fundamentals of Army reconnaissance. Today, they are members of the Unites States military profession. Today, they are soldiers.”

“We are the eyes and ears of the Army,” he said. “We are the cavalry.”