He was the first Black Marine pilot, but his hometown still got his name wrong

Petersen flew more than 350 combat missions and more than 4,000 military aircraft hours during the Korean and Vietnam Wars. 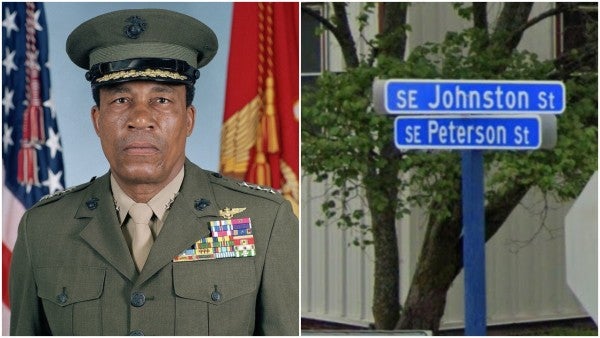 The last name of Lt. Gen. Frank E. Petersen Jr., a native Topekan who was the first Black aviator and first Black general in the Marine Corps, is misspelled as “Peterson” on all four signs standing along the street that bears his name at Topeka Regional Airport and Business Center.

The Topeka Capital-Journal made that determination this week, then contacted Eric Johnson, president/director of airports for the Metropolitan Topeka Airport Authority.

“Thanks for pointing this out,” Johnson said in an email Thursday. “We are ordering new signs and will coordinate with (Shawnee County) planning for the spelling correction.”

Related: The Obituary For America’s First Black Marine General Will Give You Chills

The signs went up after Johnson announced in 2013 that the facility's streets would be named after Kansas aviators, including Petersen, Amelia Earhart and astronauts Ron Evans and Joe Engle, according to a Capital-Journal article.

Petersen, a three-star general, was born in 1932 in Topeka and graduated in 1949 from Topeka High School. He enlisted in the Navy in 1950, then left in 1952 to accept a commission as a second lieutenant and become the first Black pilot in the Marine Corps.

While training in Florida, Petersen was ejected from a public bus for refusing to sit in the back, according to an obituary published in the New York Times after he died at age 83 in Maryland in 2015.

In Hawaii, the obituary said, a landlord refused to rent a house to Petersen and his wife, then admitted to a subsequent prospect that he did so because they were Black.

Petersen flew more than 350 combat missions and more than 4,000 military aircraft hours during the Korean and Vietnam Wars. During a mission into North Vietnamese airspace in 1968, Petersen was forced to bail out after a shell hit his plane, he told The Capital-Journal in 1988. Petersen landed just past the South Vietnamese border, “five minutes on the good side, so to speak,” he said.

Petersen suffered a broken nose, a compression fracture of a lower vertebra and a hairline fracture of his left hip while ejecting, he said, adding that he flew about 240 more missions with those injuries and did not learn how badly he had been hurt until he returned to the U.S. on leave.

Petersen earned a master's degree in 1973 from the National War College in Washington, D.C. He was promoted to brigadier general in 1979, major general in 1983 and lieutenant general in 1986. He retired in 1988 as the senior aviator on active duty in the U.S. military, then was a vice president for corporate aviation at Dupont de Nemours until retiring in 1997.

President Barack Obama appointed Petersen in 2010 to the Board of Visitors to the U.S. Naval Academy, which monitors morale, instruction and other matters.

The Navy in 2018 launched and christened a destroyer that had been named posthumously in his honor as the USS Frank E. Petersen Jr.