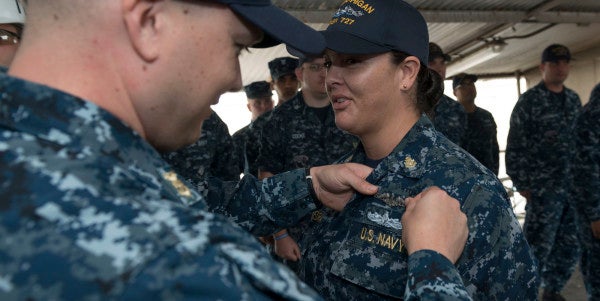 A chief petty officer has become the first woman to earn the Navy's “silver dolphins,” signaling an enlisted sailor qualified to serve aboard a submarine.

Chief culinary specialist will deploy aboard the nuclear-powered guided-missile submarine Michigan in coming months, the first sub to deploy with a crew including enlisted female sailors.

According to an announcement from Submarine Group 9, out of Puget Sound, Washington, Saavedra received her pin at a ceremony Tuesday, marking a major milestone for female sailors.

“I couldn't be more proud to wear the 'dolphins,' ” Saavedra said in a statement. “To have earned the respect of my fellow submariners is more rewarding than expected. I am honored to serve as a qualified member in such a prestigious community.”

The Michigan is undergoing a maintenance period at Puget Sound Naval Shipyard that will wrap up this summer. A spokesman for Submarine Group 9, Lt. Cmdr. Michael Smith, said a specific timeframe for deployment has not been made clear.

When the sub deploys, Smith said, approximately 20 percent of the enlisted crew will be female, or about 29 sailors: two chief petty officers and 27 crew members at the rank of petty officer first class and below.

The first four female enlisted sailors entered submarine school in August 2015, crossing one of the last major barriers to women serving in the Navy. In all, 38 enlisted women were selected to enter the training pipeline last year.

Officials said in today's announcement that 38 female sailors were selected in a second cycle in May and are designated for future assignment to the cruise missile submarine Florida, out of Kings Bay, Georgia. Officials have said enlisted women will be serving aboard Virginia-class nuclear-powered fast attack submarines by 2020.

Smith said Saavedra was not currently available for interview.

The first sub deployments with women were not without incident. In late 2014, it came to light that a male sailor aboard the ballistic missile submarine Wyoming had filmed female officers in the sub's shower area and then distributed the videos. Ultimately, a dozen sailors were investigated in connection to the incident, and 10 received punishments ranging from fines to demotion and time behind bars.

In 2014, Navy officials said enlisted female sailors would be assigned to subs that had female officers already assigned to them so that the officers can provide mentorship and support in a challenging environment.

Officials with SUBGRU 9 said the Navy would announced a third application round for enlisted women interested in serving aboard submarines in October. Applicants who are selected in that round will serve aboard the guided-missile sub Ohio, out of Bangor, Washington.