Editor’s Note: This article by Matthew Cox originally appeared on Military.com, a leading source of news for the military and veteran community. The Army announced Friday... 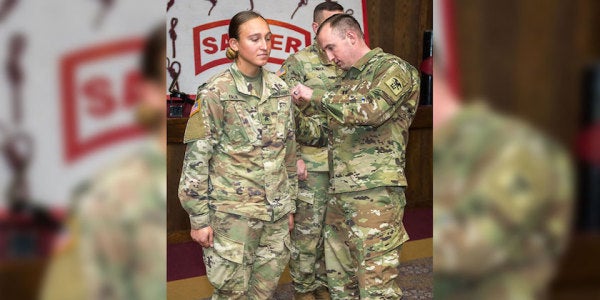 The Army announced Friday that the service's first female enlisted soldier has graduated from the physically challenging Sapper Leader Course.

Sgt. Hailey Falk, who is assigned to B Company, 39th Engineer Battalion, 2nd Brigade Combat Team, of the 101st Airborne Division at Fort Campbell, Kentucky, graduated from the 28-day combat engineer leadership course and received her Sapper tab on Dec. 7, according to an Army press release.

The Sapper Leader Course was created in 1985 at Fort Leonard Wood, Missouri. It challenges students in troop leading procedures, conventional and field expedient demolitions, and mountaineering operations, according to the release. The course finishes with an intense field training exercise that forces students to draw on specialized engineer techniques they learned throughout the program.

Students in the course are required to earn at least a 230-total score on the Army Physical Fitness Test, with no fewer than 70 points each on the pushups, sit-ups and two-mile run.

Falk said she was surprised how she felt when she learned she was going to graduate from the course.

“At that moment, that's when it hit me that I did all this. Now, it didn't seem hard anymore,” she said in the release. “During, it seemed like the hardest thing I've ever done. Then, after, I I could do this again, honestly.”

Falk, 23, is joining a fraternity of women who are taking on new challenges in fields previously closed to them before January 2016, when the Pentagon opened combat-arms jobs to females.

Since then, other female soldiers have taken on the grueling 62-day infantry leadership course notorious for pushing students to their physical and mental limits to earn the coveted Ranger tab.

In addition to Ranger School, the Army acknowledged in mid-November that for the first time, a female soldier has completed the physically and mentally challenging, 24-day selection process required for entering the U.S. Army Special Forces Qualification Course.