The first sailor to face a military trial in connection with the Navy's expansive “Fat Leonard” corruption scandal has pleaded... 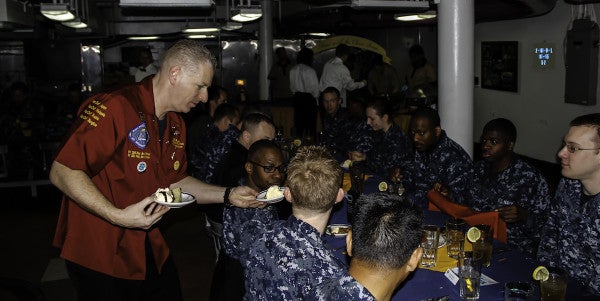 The first sailor to face a military trial in connection with the Navy's expansive “Fat Leonard” corruption scandal has pleaded guilty and been sentenced to six months confinement and a $10,000 fine.

Chief Warrant Officer 4 Brian Ware pleaded guilty to ethics violations during a court-martial at Naval Station Norfolk on Thursday that included violation of a lawful order and graft. Prosecutors said he accepted more than $8,000 worth of hotel rooms, cell phones and personal drivers during more than a dozen port visits in Asia that were paid for by Glenn Marine Defense Asia.

Ware was the food service officer aboard the 7th Fleet command ship USS Blue Ridge and the aircraft carrier USS George Washington from 2010 to 2013. In that role, he placed food orders with Glenn Marine Defense Asia, which was the only authorized contractor at the time. Company officials said they were able to significantly mark up the price of the orders Ware made, which ranged from small amounts to up to $100,000. While the Navy used a standard 21-day menu, Ware had discretion to decide which items to buy and in which quantities, according to a stipulation of facts Ware signed.

Ware has lived in Japan since 2009 and is currently assigned to the aircraft carrier USS Ronald Reagan. He enlisted in 1987 and was charged by the military less than two weeks before he was set to retire. He is one of five sailors who has been charged by the Navy in connection with the “Fat Leonard” scandal instead of the Justice Department.

“Fat Leonard” is the nickname for Leonard Francis, the owner and chief executive of Glenn Defense Marine Asia. Francis pleaded guilty in 2015 to presiding over a conspiracy involving “scores” of Navy officials, tens of millions of dollars in fraud, and millions of dollars in bribes and gifts in return for lucrative contracts to provide services to ships while in southeast Asia, according to the Justice Department.

During his sentencing hearing, Ware broke down emotionally and said he was ashamed of what he had done and that his wife in Japan and their newly adopted 2-year-old daughter would suffer.

“I lost everything. I love this uniform. I love the Navy,” Ware, 49, said through tears.

Prosecutors had sought a sentence of 15 months, while Ware's defense attorney noted that Ware was a “small fish” in the “Fat Leonard” scandal that's ensnared admirals and asked that he only pay a fine and deal with the consequences of being a convicted felon who may not be able to return to Japan because of that country's strict immigration laws and his status as a felon.