Lt. Col. Megan A. Brogden was handed a flag today that was full of symbolism. It marked her new position... 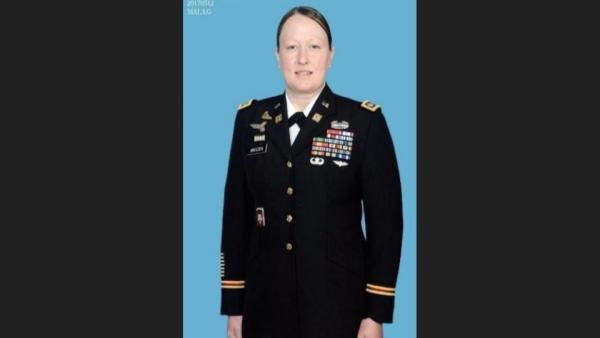 Lt. Col. Megan A. Brogden was handed a flag today that was full of symbolism.

It marked her new position as a battalion commander and all the responsibilities associated with that job.

It marked the pinnacle of her U.S. Army career so far.

And it marked a milestone in the continued diversification of Army special operations.

“It was a very humbling moment,” she said after the ceremony on Fort Bragg’s Meadows Field. “It’s such a great organization.”

But while happy to take on the challenges and proud of her accomplishments, Brogden is hesitant to mark herself as breaking new ground or smashing through any so-called glass ceilings.

“I don’t necessarily see it as much of a milestone,” she said. “I didn’t go to Ranger school or selection. It’s a lot about timing.”

Officials have called Brogden’s assuming command a historic moment for 3rd Group and the rest of the Special Forces Regiment. But during the change of command, leaders made clear that she was chosen for her expertise and leadership, not because she is a woman.

“She is without a doubt the right choice to assume command of this great unit at this time,” said Col. Bradley D. Moses, the 3rd Special Forces Group commander who passed the battalion colors to Brogden, symbolically starting her time in command.

Moses said Brogden has an unwavering dedication to soldiers, and a long history of supporting and leading special operations soldiers and maintaining the force.

“You’re a great officer, Megan. Smart, humble and full of energy. It’s an honor to serve with you again,” he said. “Lead from the front. Focus on the mission and take care of your soldiers and their families. I look forward to working with you in the days ahead.”

Brogden said the Group Support Battalion has a noteworthy reputation. It’s the largest, most diverse of five battalions within the 3rd Special Forces Group, charged with supporting Special Forces teams deployed to remote and austere environments in Africa and the Middle East.

“They have an awesome reputation,” she said.

And for the next two years, she said, she’ll work to build on that reputation and innovate to better support soldiers and their missions.

In taking command, Brogden said she feels no added pressure due to her gender. She said her selection as battalion commander shows the continuing growth of women within the special operations community.

“I think the doors are already opening, and if females want to be in the Special Forces community, the opportunities are there,” Brogden said.

Capt. Christopher Webb, a spokesman for the 3rd Special Forces Group, said the percentage of women serving in special operations is comparable to the active Army. The first female service members served alongside the predecessors of today’s special operations soldiers as early as World War II, he said.

But there’s little doubt that the role of women in special operations is changing. In addition to filling more leadership roles, USASOC continues to integrate women into previously closed military jobs, officials said, stressing that standards have and will remain high for any position.

Brogden took command from Lt. Col. Chris Paone, who had led the Group Support Battalion, also known as the Nomads, for two years.

Moses honored the work the battalion has done under Paone’s command, praising his role in a massive shift that saw the 3rd Group’s mission focus move from Afghanistan to Africa.

Along the way, Paone and the battalion had to adjust from the resource-rich Central Command area of operations to a more austere environment, often hours away from supply lines.

The Group Support Battalion, on any given day, has soldiers deployed to about 12 countries in North and West Africa. It also has soldiers in Afghanistan, working alongside local partners.

Paone praised the soldiers and battalion leaders. The special operations community needs leaders to be team-builders, Paone said. And there’s no doubt Brogden is uniquely qualified.

“The battalion can only benefit from your strong sustainment experience,” he said. “Best of luck.”

Brogden is a native of Myrtle Creek, Oregon, and was commissioned as a quartermaster officer from Oregon State University. She has served in Korea, within the 82nd Airborne Division at Fort Bragg, at Scott Air Force Base in Illinois, and at Fort Lewis in Washington.

With the 82nd Airborne, she was executive officer for Headquarters and Headquarters Company, deploying to Iraq and Afghanistan. She also served in other Fort Bragg units including as J4 plans chief at Joint Special Operations Command and, most recently, as secretary of the general staff for the 3rd Expeditionary Sustainment Command.

According to her Army bio, Brogden served two tours with a Joint Special Operations Task Force in Afghanistan and Kuwait.

She said her past experiences have molded her into the leader she is today and will help guide her in the future.

In words of advice to younger female officers, Brogden said they will need to challenge themselves as officers and take the tough jobs that will develop them into leaders.

For Brogden, those jobs have often put her in contact with leaders who have become mentors. On Friday, many of those mentors were by her side. They included retired generals, such as Lt. Gen. Kathy Gainey, Brig. Gen. Ed Donnelly and Maj. Gen. Jim Hodge; and other leaders, including Col. Kathy Graef, Col. Geoff Kent and her most recent former commander, Brig. Gen. Chris Sharpsten.