The first woman has made it through SEAL officer screening

However, she ultimately did not opt to go for SEAL training 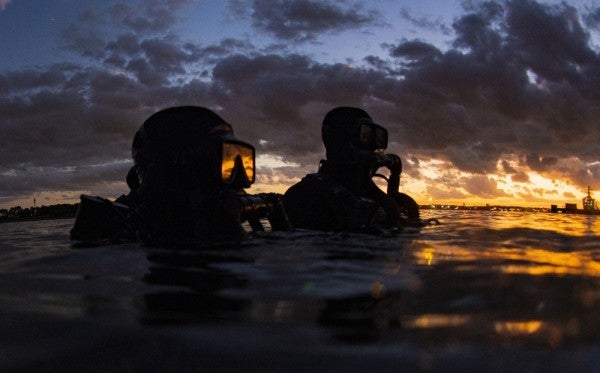 The Navy marked a first earlier this year when a woman completed Navy SEAL officer assessment and selection, Military.com has learned.

At the quarterly meeting of the Defense Advisory Committee on Women in the Services in December, a Navy official disclosed that the woman had reached the end of the physically and mentally demanding two-week SOAS process in September. Ultimately, however, she was not selected for a SEAL contract, officials said.

While the military formally opened SEAL billets — and all other previously closed jobs — to women in 2016, no woman has yet made it to the infamous 24-week Basic Underwater Demolition/SEAL (BUD/S) training to date. If the woman had been selected for a SEAL contract at the end of SOAS, she would have been the first to reach BUD/S.

Capt. Tamara Lawrence, a spokeswoman for Naval Special Warfare, said the candidate had not listed the SEALs as her top-choice warfighting community. She was awarded placement in her top choice, Lawrence said.

“We do not discuss details of a candidate's non-selection so it does not interfere with their successful service in other warfighter communities,” she said.

Candidates for SOAS are taken from college Reserve Officer Training Corps programs, service academies, and the Navy's Officer Candidate School, all prior to getting their first Navy contract. Lawrence declined to specify which pathway the recent female candidate had taken out of concern that doing so would reveal her identity.

Lt. Grace Olechowski, force integration officer with Naval Special Warfare Command, said five women had been invited to participate in SOAS since the pipeline was opened to women. Three had entered SOAS to date, but only one had completed assessment and selection.

Military.com broke the news in 2017 that a first female student had entered SOAS — an ROTC student at a U.S. college. She ultimately exited the process before reaching the selection panel, however.

Lawrence said the SEAL officer selection process is candidate-neutral, meaning the selection board does not know the gender or other personal information of the candidates.

“Selection is based on the candidate's scores during the two-week SOAS assessment,” she said. “This process ensures every candidate has a fair and equal chance based on Naval Special Warfare standards.”

It's also possible that not listing the SEALs as a primary career choice would factor against a candidate in the selection process.

The selection panel is made up of senior SEAL officers, Lawrence said, who use SOAS assessment data along with resume information to select “the most competitive candidates.”

Roughly 180 candidates are selected every year to attend SEAL officer assessment and selection, she said; on average, the top 85 candidates are chosen to continue on to SEAL training. There are four two-week SOAS blocks held every year.

While SOAS precedes the award of a final SEAL contract, it is not for the faint of heart. It was previously called “mini-BUD/S” in a nod to its grueling and rigorous nature.

“Physical stress and sleep deprivation are applied to reveal authentic character traits,” the Navy says on its official Naval Special Warfare recruiting site. “Performance and interview data on every candidate is meticulously documented and presented to the NSW Selection Panel.”