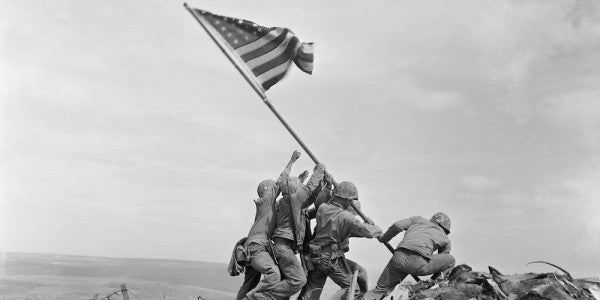 Editor’s Note: This article by Hope Hodge Seck originally appeared on Military.com, the premier source of information for the military and veteran community, in June 2016.

What does it take to set straight an iconic piece of American history? For retired Marine Lt. Col. Matt Morgan, it was years of research and dogged forensic analysis.

The Marine Corps made national headlines last year when officials announced that one of the men in perhaps the most iconic photograph of Marines in World War II had been misidentified for decades. A 1945 photograph by Associated Press journalist Joe Rosenthal of six Marines raising a flag on Mt. Suribachi — an image that Navy Secretary James Forrestal famously said would ensure the Corps’ survival for another 500 years — did not include Navy corpsman John Bradley, officials concluded. Instead, it pictured Pfc. Harold Schultz, a quiet mortarman who died in 1995 without ever setting the record straight.

Morgan, who served in the infantry and as a public affairs officer during his career, told Military.com in a June 23 interview that his journey to find answers about the famous photograph began in 2005, when he was a student at the Marine Corps’ Command and Staff College at Quantico, Virginia.

Morgan said he received a call from a friend, retired Marine Sgt. Maj. James Dever, who had been working as a military adviser on Clint Eastwood’s film, “Flags of Our Fathers,” based on the bestselling book of the same name by Bradley’s son, James.

“He said, ‘I’ve got something interesting here. I don’t think John Bradley is in this photo,’” Morgan said. “I looked at it independently and very quickly came to the same conclusion.”

But who the misidentified Marine was remained unclear. Morgan knew that historians had placed Bradley at three different positions in the image through the decades, and had done the same with Cpl. Ira Hayes, another flag raiser.

“It turned out that many of the guys had been misidentified at different times,” Morgan said.

Without a firm lead, Morgan let the issue rest for nearly a decade.

“As Marines, both Dever and I knew what we were suggesting was rather serious,” he said. “To bring everything forward, we needed to have our facts firm.”

In 2014, the two Marines found themselves working together as advisers on another Eastwood film, the Chris Kyle biopic “American Sniper.” Morgan said Eastwood tended to use the same crew members on his projects, and the topic of the controversial photo again came up among those who had worked on “Flags of Our Fathers.” Dever and Morgan agreed the subject would make an intriguing future documentary project.

And then, in the fall of that year, their idea got a shot in the arm: two amateur historians, Eric Krelle and Stephen Foley, went public with a theory that the service member formerly identified as Bradley was, in fact, Schultz.

The conclusion was the result of hours of poring over grainy images from Feb. 23, 1945, the day of the famous flag-raising. Rosenthal’s photographs were augmented by those of combat photographer Louis Lowery, then a staff sergeant. One of the photos taken by Lowery of the raising of a smaller flag earlier in the day show’s Schultz in the very corner of the shot, a strap hanging off the brim of his helmet. Other photos by Rosenthal taken after the famous flag-raising show a Marine with a mysterious shadow in front of his face and a rifle slung lower than the rest. That shadow was Schultz’s hanging helmet strap, the historians concluded. Video evidence and that low-hanging rifle made them confident: the mystery man was Schultz.

Morgan and Dever approached the Marine Corps that same year with the theory, discussing the matter with Chief Historian Charles Melson. They returned at the beginning of this year with a detailed forensic analysis of the evidence. They also had the backing of the Smithsonian Channel, whose executives they had approached shortly after Krelle and Foley came forward with their theory.

The forensic analysis was brought to the attention of the commandant, Gen. Robert Neller, and the Marine Corps formally announced their own investigation into the identity of the mystery Marine in May.

“I often credit the fact that it took these outsiders, these folks who work with Marines who were willing to challenge the status quo and develop a more cogent theory,” Morgan said. “I tend to know how the Marine Corps approaches these things. We had to present them with something that was pretty strong. We had to frame it in a way we’re not suggesting any kind of misdeed or conspiracy. We think it was an honest mistake.”

And, in fact, the dramatic challenge to the historical record has resulted in remarkably little bad blood. James Bradley told the New York Times in May that he had become convinced that his father was not actually in the famous image, but had taken part in the earlier flag-raising the same day.

As for Schultz, few who knew him could shed light on the mystery of why he never came forward. He never had any children of his own, but his step-daughter, Dezreen MacDowell, has described him to reporters as quiet and humble. He did, however, attend reunions of Iwo Jima veterans, Morgan said, and among his possessions was a photograph signed by Joe Rosenthal from one of those events.

“He continues to be a bit of an enigma,” Morgan said.

As for Bradley, his heroism is not in question. He would earn the Navy Cross for risking his life to triage a Marine infantryman Feb. 21 at the base of Mt. Suribachi, pulling him 30 yards through a hail of gunfire to safety.

“Although the Rosenthal image is iconic and significant, to Marines it's not about the individuals and never has been,” Neller said in a statement about the photograph. “Simply stated, our fighting spirit is captured in that frame, and it remains a symbol of the tremendous accomplishments of our Corps — what they did together and what they represent remains most important. That doesn't change.”

For Morgan, Schultz’s story is one of the selfless service that is so valued by the Marine Corps.

“I’ve often felt that the types of Marines and service members that are the most worthy of honor are the ones who don’t seek it. Harold epitomizes that,” he said. “On a day that everyone wants to step into the spotlight, men who do their duty and go back to their lives, it’s the most American thing anyone could do.”

The in-depth documentary that delves into Schultz’s story, “The Unknown Flag Raiser of Iwo Jima,” will air July 3 on the Smithsonian Channel.