In a battle between America’s symbolic bird of prey and Florida man’s nemesis, a Parrish man said not on his … Continued 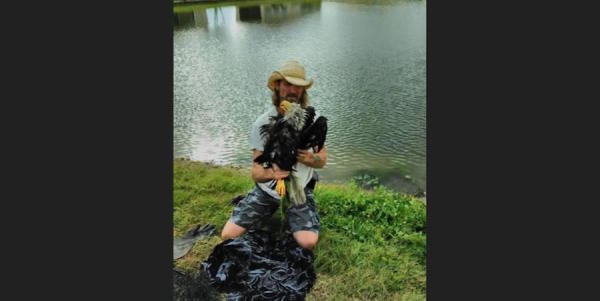 In a battle between America’s symbolic bird of prey and Florida man’s nemesis, a Parrish man said not on his watch.

A male bald eagle sat at the edge of a pond behind his home in the Copperstone subdivision when the alligator clamped its jaws on the bird Wednesday.

When David Anderson saw this he jumped into action, wading through a pond and prying the bald eagle from the alligator’s jaws.

“It’s our bald eagle. It’s our treasure,” Anderson, who is also going through chemotherapy, told Fox 13. “It stands for who we are and what we are.”

A neighbor called Justin Matthews of Matthews Wildlife Rescue and he arrived clad in a cowboy hat and camouflage cargo shorts.

The eagle’s legs were rendered useless and blood trickled from its throat.

Matthews then took the eagle to Save Our Seabirds, who then took him to a veterinarian in Osprey, according to Matthews’ Facebook post.

Unfortunately, the eagle had to be euthanized.

The wildlife rescuer said that Anderson is the reason the bird died peacefully, commending him for his efforts.