Authorities say an alarm triggered Monday as the unidentified man's checked bag passed through security. When the bag was opened, Transportation Security Administration officials were "surprised" to see the unassembled parts of a grenade launcher and realistic-looking mock grenade inside 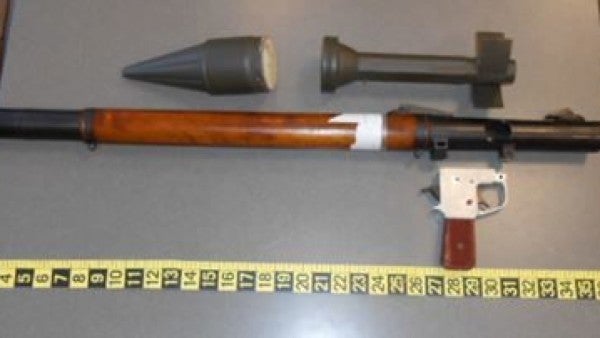 When the bag was opened, Transportation Security Administration officials were “surprised” to see the unassembled parts of a grenade launcher and realistic-looking mock grenade inside.

The man, who lives in St Augustine, was located at his departure gate and detained by police for questioning. The man will not face charges and authorities said they will not release his name.

“Upon closer inspection, it was determined that the various components of the device could be assembled, but fortunately the device was not a functioning launcher and the grenade itself was a realistic replica,” the news release states.

The man told officials that he believed the item could be brought on the flight in a checked bag. But, authorities say no “realistic or replica” weapons are permitted on airplanes.

The items were confiscated and the man was able to catch his flight to Orlando Sanford International Airport.

TSA authorities say those who bring weapons and replica weapons to the airport are subject to possible civil penalties of up to $13,000.