A Kissimmee Police officer spent his Saturday afternoon scrubbing the blood of his fallen colleagues off the pavement of Palmway Street. “I... 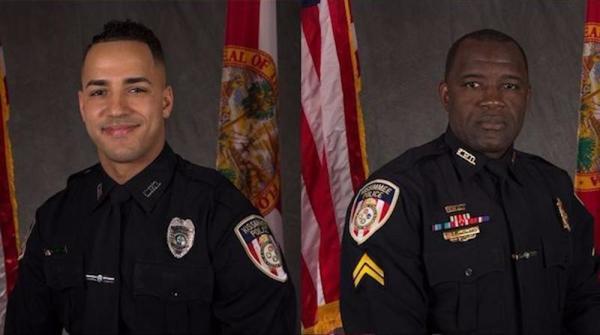 A Kissimmee Police officer spent his Saturday afternoon scrubbing the blood of his fallen colleagues off the pavement of Palmway Street.

“I just don’t want to see this every time I drive by,” Sgt. Matt Koski said as he splashed soapy water onto the road.

The night before, Sgt. Richard “Sam” Howard and Officer Matthew Baxter were fatally shot during a routine stop near Cypress Street. Marine veteran Everett Glenn Miller, 45, opened fire on the officers about 9:30 p.m. They didn’t have a chance to fire back.

“It looked like they were surprised,” said Kissimmee Police Chief Jeff O’Dell.

A Kissimmee police officer is scrubbing blood off the street where two of his fellow officers were fatally shot last night. pic.twitter.com/olr6zd0zB4

Baxter reportedly stopped Miller minutes earlier in a group of three people he deemed “suspicious,” O’Dell said. Howard was in the area and decided to come help as back up.

Investigators are still working to determine exactly what happened in the moments before the shooting, but the chief said a “scuffle” may have broken out.

Miller fled to Roscoe’s Bar at 2344 N. Orange Blossom Trail, where Osceola County Sheriff’s Office detectives found him about 11:30 p.m. When the officers approached him, Miller reached for his waistband — but a fast-acting deputy tackled him and arrested him, O’Dell said.

“Extremely brave and heroic actions by the deputy — there were other people in the vicinity,” he said. “They went hands-on, tackled him to the ground and secured him located a 9mm and .22 revolver on his person.”

When officers took Miller to the Osceola County Jail on Saturday, they placed Baxter’s handcuffs on his wrists, O’Dell said. He faces charges of first-degree murder, resisting arrest and carrying a concealed weapon.

The Sheriff’s Office recently took Miller into custody under Florida’s Baker Act, which allows involuntary commitment of people in mental health crises. Miller, who has no criminal record in Florida, was enlisted in the Marines from 1989 to 2010, according to military records.

O’Dell said the community needs to work with law enforcement. Social media posts showed Miller threatening law enforcement, he said, “but we never got a call on that.’’

A Facebook page believed to be Miller’s is filled with posts expressing anger over racism, slavery and the KKK. In one post, he shared a meme encouraging people to “shoot back” with a photo of Martin Luther King Jr.

“You can poke a tie up dog for so long,” he wrote.

The officers — who were wearing body armor underneath their uniforms — were on proactive patrol in an area historically plagued by crime. In 2008, law enforcement led a crackdown on drugs and violence that “ravaged the McLaren Circle area,” according to the U.S. Attorney’s Office.

Officers arrested 19 people during that operation, and witnesses in subsequent court cases testified crime was so rampant that mobile businesses such as FedEx, UPS, pizza delivery and taxis “refused to enter the area to provide services to residents.” Even the U.S. Postal Service stopped deliveries in the neighborhood for a time.

Residents flocked to Kissimmee Police headquarters Saturday, bringing food and shaking the hands of officers to express their condolences. At 5:35 p.m., they had a moment of silence near a memorial for fallen officers outside.

This woman became emotional dropping off flowers to the memorial outside the #Kissimmee police department https://t.co/Z3bLvA4hYs pic.twitter.com/v0Y8lPNb8j

O’Dell said the news is especially difficult for members of his agency, as they must press forward while suffering the loss of two coworkers and friends.

“We do not get to stop and cry for someone we’ve lost or mourn our hero,” he said. “At the time we go through it, the men and women of law enforcement are required to continue working and bring this individual to justice.”

Baxter, 27, was married to a fellow Kissimmee Police officer and had four small children, O’Dell said. Howard, 36, had one child.

“They are both wonderful men, family men. They are both very committed to the community,” the chief said. “They were the epitome of what you ask for in law enforcement officers.”

O’Dell praised other police agencies, including the Osceola and Orange sheriff’s offices and the Orlando Police Department, for their help.

“Everyone came to the scene without being asked,” he said.

President Donald Trump and Vice President Mike Pence said on social media that their “thoughts and prayers” were with the Kissimmee Police.

My thoughts and prayers are with the @KissimmeePolice and their loved ones. We are with you!#LESM

A prayer vigil will be held at the Hope Mission Church, 1431 Palmway St., at 3 p.m. Sunday. The church sits at the intersection where Howard and Baxter were shot.

The City of Kissimmee has set up an account with SunTrust Bank for individuals who wish to make donations to help Howard’s and Baxter’s families. Donors can go to any SunTrust Bank location beginning Monday to contribute, a city spokeswoman said.

The Kissimmee Police Department has more than 100 officers. O’Dell took over the department in August 2016. Before Friday, the last Kissimmee officer killed on the job was shot in 1983.

Today we share a message for all, and offer a way to help the families of @kissimmeepolice Officer Matthew Baxter & Sam Howard. pic.twitter.com/vV3LBc3y7b

It has been a dangerous year for law enforcement in Central Florida. Lt. Debra Clayton, a 17-year veteran of the Orlando Police Department, was killed in a gunfight in a Wal-Mart parking lot while trying to arrest Markeith Loyd, a suspect in the murder of his pregnant ex-girlfriend, Sade Dixon. Loyd was later captured after a nine-day manhunt.

Orange County Sheriff’s Deputy Norman Lewis, a motorcycle officer, also was killed that day during the pursuit for Loyd.

Dixon and Loyd joked about killing an officer in a video posted on social media that was taken during a traffic stop the month before her death.

Gov. Rick Scott signed an executive order Saturday that transferred Miller’s case from Orange-Osceola State Attorney Aramis Ayala’s office, who has refused to seek the death penalty, to State Attorney Brad King of Ocala. This is the 27th case he has transferred.

“I am using my executive authority to reassign this case to State Attorney Brad King to ensure the victims of last night’s attack and their families receive the justice they deserve,” he said in a statement.