Ninety-six might be a bit old to start over, but that's what one World War II veteran is facing. Lucien... 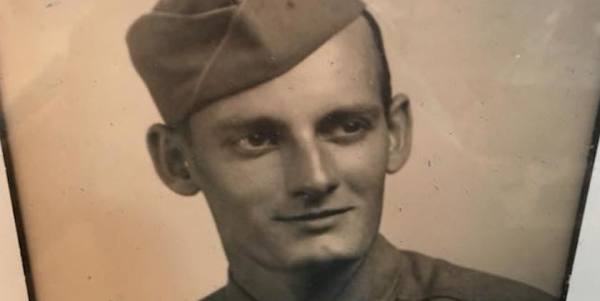 Ninety-six might be a bit old to start over, but that's what one World War II veteran is facing.

Lucien “Chet” Lebrun was recently given notice that he'll be evicted from his home at 123 Bass Circle in Lakeland, Florida. Lebrun's mobile home suffered significant damage to the roof and outside during Hurricane Irma in September, and he hasn't had the means or ability to get it repaired.

“The carport ended up on the other side of the mobile home,” he said. “I was sitting here and it was pretty bad. It took the roof off my shed.”

Lebrun lives independently with his cat, Kitty, in the retirement community of Cypress Shores off U.S. 92 in Winter Haven. Lebrun has lived at his home for more than five years and in the community since the late 1970s.

“They want me to fix the skirting and paint the house,” Lebrun said. “I can't even walk.”

Lucien “Chet” Lebrun , 97, in his home in FloridaGoFundMe

The doors at the park's clubhouse were locked Monday and no one answered the listed number. The initial paperwork was given to Lebrun on Jan. 18, giving him until Jan. 29 to settle the issue.

“I spent three years in the jungle, fighting,” Lebrun said. “I never complain, but there's not much I can do about it.”

“They've gone in his house and taken pictures,” she said. “They've listed so many nit-picky things. Apparently, they're on an eviction roll out there. It may be in his best interest for us just to relocate him.”

Lebrun was denied assistance from the Federal Emergency Management Agency in September. His appeal in October was denied, as well.

“I talked with (U.S. Sen. Marco) Rubio's office, and they're working to expedite that process,” said Kat Gates-Skipper, veterans advocate and candidate for Board of County Commissioners. “That generation is very independent. He really doesn't want to go to assisted living.”

Veterans Affairs and the Florida Department of Health are in favor of him entering an assisted-living facility.

“He was adamant that if he was forced to go into an assisted-living facility, he'd end up homeless,” Bingham said. “The VA claims he has severe dementia and that's just not true. He's very private, and he deserves to be treated better than he has been after all he's done for this country.”

Nearly two months from his 97th birthday, Lebrun has undergone hardships before. During his service in the Pacific, he suffered significant wounds to his shins. After leaving the service, he needed plastic surgery for burns on his arms after an explosion occurred at a car dealership where he worked in New Zealand.

“He's like a walking history book,” Gates-Skipper said. “He still has his American flag flying; bless his heart. He wanted to replace his flag. That was something that was very important to him.”

Bingham estimates the cost to relocate Lebrun will run between $15,000 and $20,000. According to Bingham, Kai McCall, who owns Kai's Mobile Home Movers, has volunteered to make the renovations free of charge to the current building. The worry, Bingham said, is that the current location will be renovated and Lebrun will be evicted for something else.

Others such as ABA Disaster Relief Ministry and American Legion Post 8, both in Winter Haven, have come to assist Lebrun. The ministry has performed in-kind services like mowing the lawn while the American Legion has offered financial aid and assistance with construction.

“I'm 96, served in World War II, disabled,” Lebrun said. “They just threw five families out. I can spread the word around not to buy here in this park.”