Republican candidate Floyd McLendon of Texas spoke to an audience at his campaign kick-off event in November, wearing the Navy uniform adorned with numerous medals — but the inaugural event in Dallas was held in the 30th congressional district, a different district than the one McLendon is running in 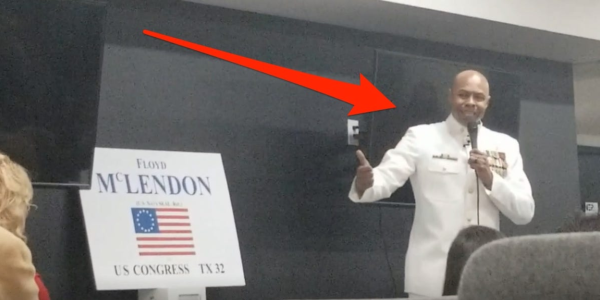 Republican candidate Floyd McLendon of Texas spoke to an audience at his campaign kick-off event in November, wearing the Navy uniform adorned with numerous medals — including what appeared to be the Navy SEAL Trident, the insignia reserved for members of the elite community like McLendon.

The inaugural event in Dallas was held in the 30th congressional district, a different district than the one McLendon is running in. Political strategists in Texas described the venue's location as highly unusual for a House candidate.

“It's not usual. And I don't know if I can think of a time where somebody kicked off their campaign in some place that wasn't in their district, and then it would be really outrageous is when they didn't realize it was in their district,” Matt Angle, a Democratic strategist from the Lone Star Project, said to Business Insider. “They need to have a pretty darn good reason for kicking off their event in a district in another one they're running in.”

McLendon choice of attire appears to violate Navy regulations. Both the Navy and Marine Corps prohibit wearing the uniform at political events — even for “retired members and members of reserve components.”

McLendon's campaign did not respond to multiple requests for comment.

Images of McLendon's awards indicate he served at least 24 years in the Navy. According to his biography on his campaign website, he enlisted in the Navy as a radar and satellite communication specialist before attempting to join the SEALs.

McLendon failed his first attempt at the grueling, 24-week long Basic Underwater Demolition/SEAL training course after an injury, according to his website. He returned three years later and graduated from the course, eventually deploying to Iraq and Afghanistan and earning the Trident pin.

After his naval service, McLendon worked as an aide to Texas Attorney General Ken Paxton. He has since raised at least $150,000 for his campaign, far less than the Democratic incumbent and other Republicans running in the district.

McLendon says he is a staunch ally of President Donald Trump and echoes his rhetoric in his “God-centered, conservative” campaign.

“I am the one candidate who will fight for the president's America First agenda, who is unmistakably conservative, and who is running a grassroots-fueled campaign to take this seat back from a Pelosi Democrat,” McLendon said in a November statement.

“The radical democrats are trying to impeach President Trump based off of second-hand information from an anonymous source,” McLendon said in a Facebook post in October, referring to the House Democrats's impeachment investigation. “My opponent, Colin Allred, has teamed up with Adam Schiff to try and further this charade.”