Flynn Warns Iran They Are ‘On Notice’ After Ballistic Missile Test

The U.S. has put Iran “on notice” for carrying out a medium-range ballistic missile test and attacks by proxy forces... 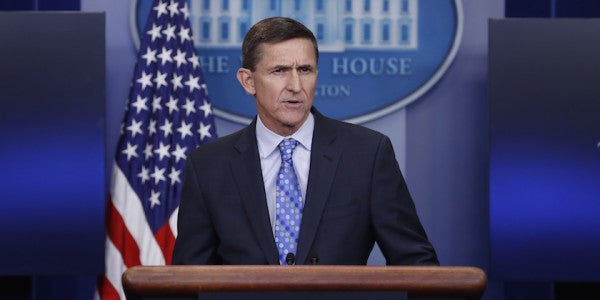 The U.S. has put Iran “on notice” for carrying out a medium-range ballistic missile test and attacks by proxy forces on a Saudi frigate, White House national security adviser Michael Flynn said Wednesday, a cryptic comment that appeared to signal the Trump administration is taking a tougher stance on Iran than its predecessor.

“The Trump administration condemns such actions by Iran that undermine security, prosperity and stability throughout and beyond the Middle East and place American lives at risk,” Flynn told reporters at the White House.

Iran’s first real test of the Trump administration came Sunday, when the U.S. military tracked an Iranian missile launch Sunday at a site more than 130 miles east of Tehran.

The missile was tracked flying southward 650 miles before exploding when its re-entry vehicle failed, according to U.S. officials who weren’t authorized to speak publicly on what their intelligence showed.

Flynn said the launch was a violation of a United Nations resolution passed shortly after the landmark 2015 nuclear deal between Iran and six world powers was reached. Former President Barack Obama was a major proponent of the deal.

“The Obama administration failed to respond adequately to Tehran’s malign actions — including weapons transfers, support for terrorism, and other violations of international norms,” Flynn said, adding that “Iran continues to threaten U.S. friends and allies in the region.”

Resolution 2231 calls on Iran “not to undertake any activity related to ballistic missiles designed to be capable of delivering nuclear weapons, including launches using such ballistic missile technology.”

The U.N. has not yet determined whether the launch was a violation, but Iran has repeatedly maintained that missile development is within its rights to self-defense against attack from Israel, its longtime regional adversary.

Related: A Veteran’s Reaction To The Iran Deal »

The Houthis, a Shiite Muslim group backed by Iranian money and weapons, have been locked in a war with a Saudi-led coalition in Yemen since 2015 when they forced the country’s U.S.-backed president into exile and quickly swept across the Arab world’s poorest nation.

Three boats packed with explosives attacked the frigate, which was carrying 176 people, according a coalition statement, but the vessel was able to continue operating.

In October, Obama authorized a U.S. Navy destroyer to launch cruise missile attacks against coastal radar sites along the western coast of Yemen, in the same area the Saudi vessel was targeted.

The Pentagon alleged the U.S. guided-missile destroyer Mason was targeted by missiles fired from Hudaydah, a rebel-controlled area in western Yemen. The ship was not hit and no one aboard was injured.