The U.S. and South Korea announced Tuesday that a toned-down version of annual joint military drills would begin April 1... 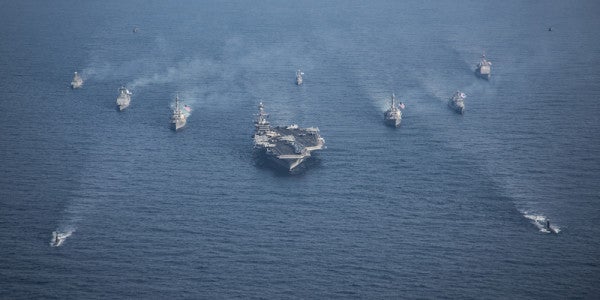 The U.S. and South Korea announced Tuesday that a toned-down version of annual joint military drills would begin April 1 amid a potentially monumental thaw in ties with nuclear-armed North Korea that could see the allies’ two leaders hold separate summits with North Korea’s Kim Jong Un.

The main Foal Eagle field exercise, which usually lasts two months, is scheduled to begin April 1 and last for a month, while the computer-simulated Key Resolve tabletop drills will be held for two weeks starting in mid-April, a South Korean military official was quoted as saying.

The joint drills had been postponed for the Pyeongchang Winter Olympics.

The large-scale exercises have long been a source of tension between the two Koreas, with Pyongyang condemning them as rehearsals for invasion.

It was unclear if the U.S. would dispatch B-1B heavy bombers, nuclear-powered submarines or aircraft carriers to the drills, but media reports citing a South Korean Defense Ministry official said that there are no immediate plans to do so. The United States has sent such assets during past drills when tensions ran high.

The Pentagon said in a short statement earlier that U.S. Defense Secretary Jim Mattis and his South Korean counterpart, Song Young-moo, had agreed to go forward with the exercises “at a scale similar to that of previous years.”

It said North Korea’s military had been notified of the “defensive nature” of the drills.

Asked if that training would continue, Logan refused comment.

“To avoid compromising exercise objectives, specifics regarding the exercise scenarios will not be discussed,” he said.

However, he stressed that the exercises are “defense-oriented and there is no reason for North Korea to view them as a provocation.”

Logan also said that the exercises “are not conducted in response to any DPRK provocations or the current political situation on the peninsula.” DPRK is the acronym for the North’s formal name, the Democratic People’s Republic of Korea.