Less than an hour into his murder trial, a former Marine pleaded guilty to killing an Army reservist in a... 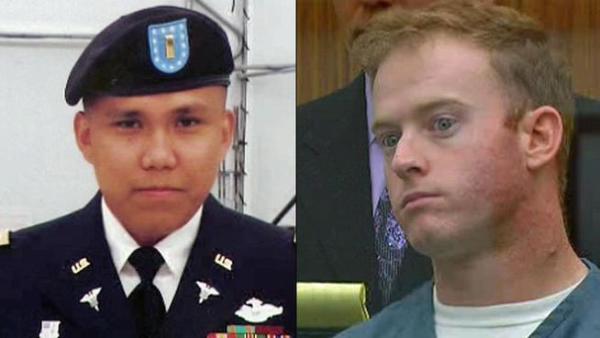 Less than an hour into his murder trial, a former Marine pleaded guilty to killing an Army reservist in a Fallbrook motel in 2012 — a brutal attack in which the victim was stabbed 44 times and shot twice in the head.

After the prosecutor gave his opening statement to a jury in Vista on Tuesday, defendant Kevin Coset asked for a sidebar to discuss changing his plea, Deputy District Attorney David Uyar said.

After some discussion, Coset agreed to plead guilty to murder and allegations that he used a gun and a knife to kill Alvin Bulaoro. The prosecutor agreed to drop a special circumstance allegation — which could have sent Coset to prison for life without parole.

The 27-year-old faces up to 51 years to life in prison when he is sentenced April 20.

Coset represented himself in court. He is jailed, and could not be reached for comment Wednesday.

After nearly two weeks passed, on Jan. 3, 2013, Bulaoro’s brother found the victim’s Toyota 4Runner in the parking lot of a Fallbrook grocery store. Detectives found the body in the backseat, inside a sleeping bag.

Sheriff’s detectives had a mystery with few clues.

Through cell phone records, investigators learned that Bulaoro had planned to meet up with someone that day, according to Uyar’s trial brief.

But that person, it turned out, was using a pre-paid cell phone purchased with cash. Investigators obtained surveillance of a man buying the phone, but had little else.

Then one of them thought to check on the sleeping bag, and learned that it was a style sold on base at Camp Pendleton.

One had been sold on base in the hours before Bulaoro disappeared. Investigators found surveillance video of the buyer, and it looked like the same man who’d bought the pre-paid phone, according to the trial brief.

This time, the man had paid with a credit card.

The same card had been used later that day to pay for a Fallbrook motel room. There was also an additional $100 charge for damage to the room — damage that included a missing comforter and a large pool of blood. No one at the motel called authorities to report it.

The room appeared clean by the time detectives arrived weeks later. But they found Bulaoro’s blood under the carpet and on the padding. It was also on the walls, ceiling and furniture, the trial brief states.

According to Uyar, messages between Coset and Bulaoro indicated they already had a sexual relationship when they met up in the Fallbrook parking lot.

Authorities arrested Coset — then a 23-year-old Marine corporal — outside his barracks in February 2013. He had a loaded gun in his waistband.

In his car, they found the gun used in the attack on Bulaoro, according to the trial brief. In Coset’s barracks room, they found a journal.

One section read: “My name is Kevin Coset. I am 23 years old and currently serving in Marine Corps. Over the past few years my life has been heading in a strange direction. Tonight I had to kill for the third time.”

“It was a guy named Alvin Bulaoro out of Fallbrook.”

Coset wrote that he had to do it to “survive in my fight” against something he called “the Musgrove organization,” which he said had plotted against him for years, had entered his mind and stolen his intelligence.

Early on in the criminal proceedings, Coset served as his own attorney. He was later deemed mentally incompetent to stand trial and was sent to a state hospital.

When he was later found to be competent, Coset was sent back to San Diego County to face trial. Last year — following a psychiatric evaluation — he was again granted permission to represent himself.