A Louisiana man with former ties to law enforcement and the military was arrested after authorities said he committed a... 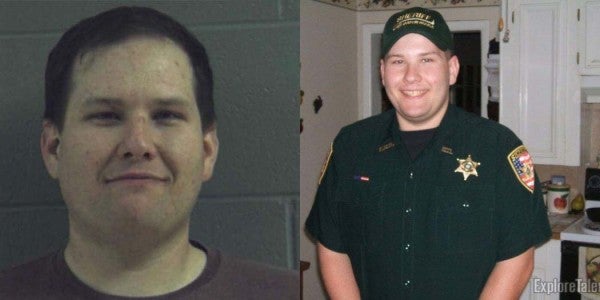 A Louisiana man with former ties to law enforcement and the military was arrested after authorities said he committed a hate crime, targeting a Livingston Parish convenience store because he believed the owners were Muslims — a group he blamed for “killing his fellow service members overseas.”

Chad Horsley, 27, of Denham Springs, is accused of several recent offenses all involving a convenience store on La. 1019, according to a news release Monday evening from the Livingston Parish Sheriff's Office.

Sheriff Jason Ard said Horsley first entered the store on Feb. 27 and claimed he was a law enforcement officer. Horsley said then that he suspected drug activity and planned to return and conduct a search, before leaving in a white pickup truck.

A witness told deputies that Horsley returned Saturday, drove his truck into the store and took the ATM machine. When the witness tried to stop him, Horsley pulled out a gun and left the scene.

Deputies identified Horsley as the suspect and questioned him about his actions. Ard said Horsley's account did not match surveillance footage and witness statements. Horsley admitted to investigators that he purposefully caused damage to the store because he thought the owners were Muslim.

“He blamed Muslims for killing his fellow service members overseas,” Ard said of Horsley. “He was also upset that Muslims, in his mind, were having an easier time prospering than he was despite his time in the service.”

Horsley, Eagle Ridge Drive, Denham Springs, was booked Monday into the Livingston Parish Detention Center on one count each of hate crimes, simple criminal damage to property, criminal mischief, and two counts of false impersonation of a peace officer. He was released later that day on $56,000 bond.

Horsley told investigators he was an East Baton Rouge Sheriff's deputy and Ard said investigators later learned Horsley is a former reserve deputy with the agency but has no current ties to law enforcement.

But Horsley's father, Samuel Horsley Jr., told The Advocate Monday night that his son also served full time as an East Baton Rouge Sheriff's deputy for several years, starting when he was 19 and ending when he joined the U.S. Marine Corps Reserve in 2014. Department of Defense records indicate that someone with Chad Horsley's name and date of birth served in the Marine Corps Reserve and was on active duty from November 2014 to August 2015, the time his dad said he was completing boot camp and other training.

Livingston Parish Sheriff's Office spokeswoman Lori Steele said Monday she could not provide information about Chad Horsley's law enforcement or military service. A spokesperson with the East Baton Rouge Sheriff's Office could not be reached for comment.

The elder Horsley said his son was honorably discharged from the military in December 2017 after he was diagnosed with liver disease and needed to receive treatment. He started working for a crane operating company most recently.

Family members had noticed that Chad Horsely was more distant than usual the past few months. But his dad said they never could have predicted anything close to the recent allegations. He also noted that his son has no history of mental health diagnoses or treatment.

“I'm in shock because that's not my son,” Samuel Horsley said, his voice choking up over the phone. “He's about as far from a racist as they come. I did not raise my kids that way (but) taught them to always look at people in their heart. … He wasn't in his right mind. He must've just snapped.”