The first Navy admiral to ever be charged with a federal crime in connection with his military service was sentenced... 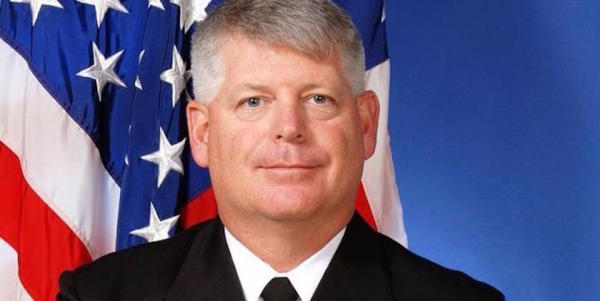 The first Navy admiral to ever be charged with a federal crime in connection with his military service was sentenced in San Diego federal court Wednesday to 1 1/2 years in prison for lying about his corrupt friendship with the wealthy namesake contractor at the center of the “Fat Leonard” bribery scandal.

It’s not just his high military rank that makes Robert Gilbeau stand out among the active-duty officers nabbed in the scheme, but his long-standing relationship with Leonard Glenn Francis, nicknamed “Fat Leonard” for his girth.

Prosecutors said the two first met in 1997 when Gilbeau served aboard the Boxer amphibious assault ship, and Francis showered Gilbeau and another officer with the gifts of hotel rooms, dinners and prostitutes during a port visit to Bali. The two would carouse in Singapore off-and-on again for the next 15 years as Gilbeau worked his way up the Navy ladder.

U.S. District Judge Janis Sammartino, who has had numerous defendants in the case come before her, said her concern about public corruption in the scandal reached “new heights” due to Gilbeau’s high rank and the “thoughtful, systematic” way he appeared to go about trying to cover up his involvement with Francis.

“You violated the law and dishonored your shipmates, the Navy and the United States of America,” Sammartino said.

Besides the time in custody, Gilbeau will serve three years’ probation, work 300 hours of community service and pay the Navy $50,000 in restitution as well as a $100,000 fine. He was expected to pay the restitution in full after the court hearing.

He is among 20 Navy officials charged in the investigation, which until now has focused on criminal conduct dating back to 2004.

Francis’ stable of compromised Navy men steered contracts to his Singapore-based company, Glenn Defense Marine Asia, slipped Francis insider information on Navy logistics and movements, protected him from scrutiny and allowed him to overcharge the Navy by nearly $39 million, according to prosecutors.

While Gilbeau pleaded guilty to only an obstruction charge, prosecutors said it was important to lay out the details of the relationship they uncovered in the investigation.

Gilbeau rekindled his friendship with Francis in 2003, according to court records. That’s when Gilbeau was a supply officer on the Nimitz aircraft carrier. Francis’ company by then was a strong presence in Southeast Asia as it provided “husbanding” services — such as water, trash removal, tug boats and security — to visiting ships and submarines.

In back-to-back visits to Singapore in September and October 2003, Gilbeau and another officer enjoyed stays at the Shangri-La Hotel, expensive dinners and sex with prostitutes, prosecutors said. The hotel was a favorite of Francis’.

The visits were the topic of an email string, including a reference to a prostitute referenced as a “hand ball player” who the other officer really wanted to see.

“The kahuna above has heard our prayers, will be standin by to (w)elcome you all back home to Papa Leonard soon. The hand ball player is waiting eagerly …, ” Francis wrote about an upcoming visit.

After the second trip, which concluded with Francis sending Gilbeau up to a paid hotel room with two Vietnamese hookers, Gilbeau signed off on GDMA invoices that overcharged the Navy for wastewater removal services, prosecutors said. The invoices for those two port visits recorded the highest volume of wastewater removal in the ship’s history, according to a Defense Contract Audit Agency analysis.

In addition to the entertainment, prosecutors point to interview statements and other documents that allege Gilbeau received $40,000 in cash for the invoice approval. Gilbeau has adamantly denied taking cash from Francis, including in a lie detector test organized by his defense attorney in the past month. The expert who conducted the test found the denial to be “not indicative of deception,” the defense attorney said.

Then Gilbeau learned Francis was under investigation, and the officer lied on a Foreign Contact Questionnaire and during an interview with Naval Criminal Investigative Service about their relationship, prosecutors said. He denied receiving gifts from Francis and said he paid for his own half of the dinners he did have with the contractor.

“The defendant conducted a pervasive and systematic campaign to mislead investigators and destroy evidence for over a year, covering a corrupt relationship with Leonard Francis spanning more than a decade,” prosecutors wrote.

Gilbeau was serving in Kabul, Afghanistan, on Sept. 17, 2013, when news broke of Francis’ arrest, along with the arrests of what would be the first wave of high-ranking Navy officials.

Prosecutors said Gilbeau had a mental breakdown that day, with others reporting erratic behavior. He destroyed records on his electronic devices and other paper files and made several unsolicited remarks about Francis, prosecutors said.

He was relieved of command after his safety and well being was questioned, and he was transferred to an Air Force base in Germany. He is currently being treated for PTSD and a traumatic brain injury related to a blast in Iraq.

Gilbeau, with his small, white service dog Bella with him court, apologized to his family in the front row and to the Navy.

“I’m deeply sorry and regretful I made the decision I made to make a false official statement,” he said. “I can’t really explain all the circumstances of why I did that.”

He again denied taking cash. “I was willing to take the polygraph because I know in my heart of hearts I’m not corrupt.”

Both he and his defense attorney pointed to his otherwise stellar career with the Navy, which began in 1979 at the U.S. Naval Academy and included a Purple Heart medal for service in Iraq.

He was forced to retire at a demoted rank of captain because of this case.

“I never wanted to end my career this way. I’m still proud of my career and to be an American.”