A man said to be a former decorated U.S. Navy SEAL and CIA special agent has been arrested in connection... 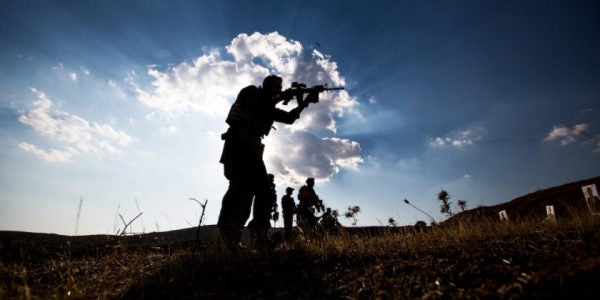 A man said to be a former decorated U.S. Navy SEAL and CIA special agent has been arrested in connection with an ongoing national federal marijuana smuggling investigation with major ties to Columbia, South Carolina.

James Dennis “J.D.” Smith, 49, was arrested Saturday in Charlotte. On the same day, two Columbia-area brothers, Carl Rye, 41, and Bryon Rye, 43, were picked up in a Rosewood Drive house by authorities.

All three are part of the same case. They are each charged with conspiring to distribute “at least 700 kilograms (1,540 pounds) or more of marijuana since 2014, according to a criminal complaint. The charge carries a sentence of five to 40 years in prison.

Some of the marijuana seized in a storage unit belonging to Carl Rye was apparently legally grown medical marijuana and came from California. It was marked “Unlawful to redistribute,” according to the complaint.

Smith and the Ryes, shackled hand and foot and in orange jumpsuits, appeared Monday in federal court in Columbia for initial arraignment before U.S. Magistrate Judge Shiva Hodges. They are being held without bond.

Smith was identified as a former Navy SEAL and CIA special agent by multiple sources familiar with the drug smuggling case and on a website for a global security and crisis management consulting company, where Smith is listed as a principal associate. A company official said Monday he hasn’t worked there for at least five years.

According to the complaint, Smith supplied the Rye brothers with marijuana. Bryon Rye supplied the money to buy Smith’s marijuana, and Carl Rye sold the marijuana in South Carolina, including to a distributor in Beaufort County, legal papers said.

Smith had bought the airplane, a twin-engine Cessna with a range of some 1,000 miles, under the business name of “The Praetorian” for use in medical humanitarian missions in Central America, according to aviation and court records.

The Ryes were picked up on Saturday in connection with a law enforcement raid on Saturday at a house in the Rosewood section of Columbia, several miles from downtown.

In that daytime raid, which surprised Rosewood neighbors, more than a dozen heavily armed agents in about 10 unmarked cars smashed a hole in the door of the house at 3905 Rosewood Drive, where Bryon Rye lived.

“I was like, what’s going on?” she said. “SWAT guys were in their full gear on the edge (of the wall in front of the house). I think they were trying to protect the scene.” Moore said she also saw a box outside the home that read “DEA Evidence.”

The Ryes stored marijuana they got from Smith at two storage units Carl Rye rented, one at the Riverchase Self Storage in Lexington, and the other at The Storage Center in Aiken, the complaint said.

According to an Internet site of a security and crisis management company that Smith worked for, Smith was in the SEALS for 16 years and was recruited by the CIA as “a special agent for the Office of Security.” As a SEAL, Smith served in Iraq and earned a Bronze Star with V for heroism in combat and received a Special Operations Medic of the Year award. With the CIA, he provided security for U.S. and foreign clients in war-zone environments, including Afghanistan, Haiti, Pakistan, Africa and Latin America, the website says.

The case was developed by the DEA and its state Tactical Diversion Squad, which includes officers from Richland County, Columbia police and the 5th Circuit Solicitor’s office. The FBI and Homeland Security Investigations also assisted.