This Former Parris Island Drill Instructor Is Being Separated From The Corps. Here’s Why 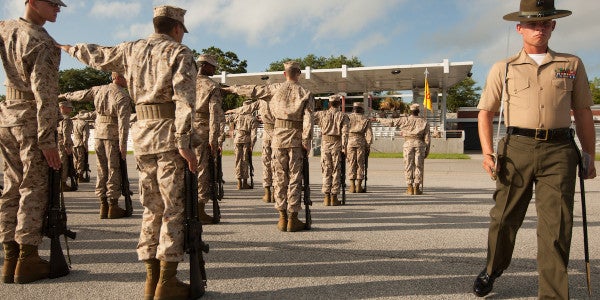 The last of the former Marine Corps Recruit Depot Parris Island drill instructors implicated in perhaps the most notorious trainee abuse scandal the Corps has seen in more than six decades has pleaded guilty to multiple violations of military code and is being separated from the service.

Sgt. Michael Eldridge pleaded guilty to failing to obey an order, disorderly conduct and maltreatment, according to the Corps, for his part in a July 2015 incident during which he, among other things, was accused of hazing a Muslim recruit by ordering him into a commercial clothes dryer and turning on the machine multiple times. Eldridge was alleged to have interrogated the recruit, Ameer Bourmeche, about his loyalty and to have made him renounce his faith before allowing him to exit the dryer.

Implicated in the same incident was former-Gunnery Sgt. Joseph Felix, who in October was sentenced to 10 years in prison and a dishonorable discharge after a court-martial found him guilty of abusing Bourmeche — now a lance corporal — and former trainee Raheel Siddiqui just before his death in March 2016.

Eldridge entered his plea during a summary court-martial at an undisclosed date. He was reduced in rank to corporal, given 45 days restriction and, according to the Corps, is in the process of being administratively separated from the Marines.

The summary court-martial, a low-level proceeding, was part of a pre-trial agreement that required him to testify against Felix, who last fall faced general court-martial — the highest-level military court — at Marine Corps Base Camp Lejeune, N.C.

During Felix’s trial, government prosecutors painted him as a sadist with a pattern of targeting Muslim trainees, including Rekan Hawez — who also testified Felix ordered him into a dryer — Bourmeche and Siddiqui.

Siddiqui, 20, a Muslim and Pakistani-American from Taylor, Mich., died March 18, 2016, after falling three stories from his barracks following an altercation with Felix while trying to request permission to go to sickbay.

Felix was found to have made Siddiqui — who was reportedly had an extremely sore throat and had recently coughed up blood — perform a series of punitive exercises and, after the recruit collapsed, to have stood over him and struck him in the face. Moments later, Siddiqui reportedly jumped up, ran out the back door of his barracks and fell from a stairwell to the ground below.

Investigations of the incident spawned a hazing probe at Parris Island that uncovered further misconduct by drill instructors and supervision failures by senior leadership.

The scandal that ensued was arguably the biggest since 1956, when a Parris Island drill instructor was prosecuted after he led an unauthorized, punitive nighttime march into Ribbon Creek, where six recruits drowned.

Felix and Eldridge were the fifth and sixth, respectively, drill instructors to be referred to courts-martial in the wake of the probe.

And Lt. Col. Joshua Kissoon is still scheduled to face general court-martial beginning March 12 at Marine Corps Base Quantico, Marine Training and Education Command spokesman Capt. Joshua Pena said Monday morning. Kissoon is charged with failing to sideline Felix, who the Corps says should not have been supervising Siddiqui’s training platoon because he was already being investigated for the dryer incidents.

On March 31, 2016, the depot announced Kissoon had been relieved of command, a decision the Corps says was made the day before Siddiqui’s death.

Siddiqui’s family has filed a $100 million federal lawsuit claiming negligence on behalf of the government.