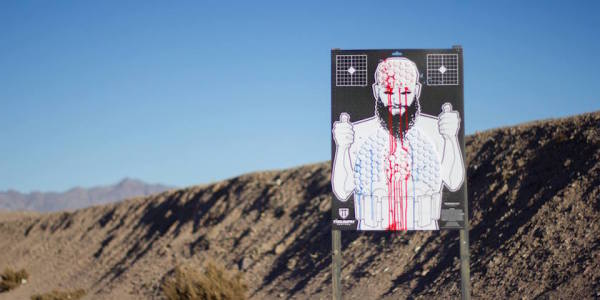 He calls himself a “former Navy SEAL-turned-accidental businessman.” And now Jared Ogden is hoping to disrupt the shooting target market with innovative designs, including zombies that bleed and lightweight pivoting systems.

Ogden, who served on active duty from 2004 to 2012, launched his business, Triumph Systems, just five months ago, in August. After extensive market research, he said, he realized he could improve training tools for law enforcement officials and concealed carry instructors by putting his own tactical training to work.

His most eye-catching product is the Threat Down, a zombie or humanoid target with vital areas covered in plastic hexagonal packs containing brightly colored biodegradable gel that “bleed” when shot.

“The more you shoot, the more patriotic you get, because look at all the red, white and blue,” Ogden said of the gel packs’ color schemes.

The packs are individually closed, meaning a single hit will only puncture one pack. And while it’s possible the bright slime will increase the fun factor, Ogden said the Threat Down series serves several tactical purposes as well.

It also adds a level of realism, he said, helping shooters overcome the psychological barrier of shooting an enemy.

“There’s certainly an aspect of psychological preparedness with this,” he said.

The targets will cost about $21 apiece, he said.

Another product Triumph is introducing as a lightweight pivoting target system that helps break bad habits with static shooting targets while reinforcing discretion at the same time. The 13-pound Pivotal Trainer is double-sided, with one side featuring a man brandishing a gun and the other showing a figure holding out a cell phone. Thus, while shooters work on speed and aim as the targets present themselves, they must also take care not to shoot a non-threat by accident.

With a retail price of $400, Ogden said he hopes to make the pivoting target system an affordable training option for more users.

“Turning target systems are great because it eliminates shooter anticipation and it forces shooter discretion,” he said. “And we have made this tool available to all Americans.”

In coming months, Ogden said he’s hoping to spread the word about his products and connect with new retailers around the country.

“We want to train smarter,” he said. “And our products certainly enhance your training experience on the range. And these tools need to be available to everybody.”