Army officials at Fort Benning, Georgia have gotten serious about enforcing COVID-19 restrictions by handing down punishments under the Uniform Code of Military Justice and administrative discipline to more than 60 soldiers, posting some of those actions on social media 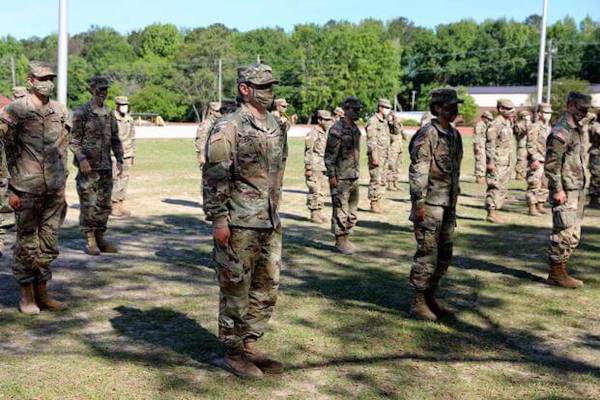 Army officials at Fort Benning, Georgia have gotten serious about enforcing COVID-19 restrictions by handing down punishments under the Uniform Code of Military Justice and administrative discipline to more than 60 soldiers, posting some of those actions on social media.

The most recent violation of Benning's COVID-19 restrictions occurred Aug. 24, when a second lieutenant received an a general officer memorandum of reprimand for “wrongfully traveling to Petersburg, Virginia,” according to a Force Health Protection UCMJ Summary posted on the Facebook page for Maneuver Center of Excellence.

“We remind all soldiers assigned to Fort Benning that a violation of General Order #5 could result in UCMJ or administrative adverse action,” the post states.

That order lays out a series of restrictions, ranging from standard COVID-19 guidelines such as wearing masks and observing social distancing, to limiting personal travel according to a July 17 memo posted on the post's Maneuver Center of Excellence Facebook page. Travel restrictions dictate troops must stay within 150 miles of Benning, but can get approved for travel up to 250 miles at the brigade command level.

Donahoe also tweeted about the latest summary on Tuesday.

“Team let's think through our actions during the upcoming long weekend. I hate signing these things,” Donohoe tweeted. “Do the right thing.”

More than 60 Benning soldiers have received UCMJ punishment “or adverse administrative actions” for violating COVID-19 rules since March, he said in a statement to Military.com.

“Personnel who violate the general order are subject to UCMJ or adverse administrative action, and we are publicizing a few of these actions to ensure our soldiers understand that there are consequences to violating the orders,” he said. “This information is meant to deter others from poor judgement and behavior. We chose the timing as a deterrence to bad behavior and poor decision-making over the Labor Day weekend. We're trying to prevent a mid-September spike. We are serious about mitigating the spread of COVID-19.”

Donohoe set a strong tone regarding the importance COVID-19 restrictions during a July 22 speech he made after taking command.

“Our mission here on Fort Benning is too valuable to the Army to let that slip away,” Donahoe said in a July 22 Army news release. “So, what we do every day, is we build the next generation of leaders. We build the next rifleman, the next tank crews, the next scouts, that are gonna go out to the Army.

“And that's an incredible task that the Army's chartered us with doing. … And the only way we can do that is by remaining a healthy force to do that with.”

“I didn't leave that installation from the 6th of February to the 6th of June,” Donahoe, said in the release. “So, I understand how we can get a little stir crazy and we want to get out.”

Benning has posted the UCMJ punishments of five other soldiers found to have violated COVID-19 orders.