A former Fort Bliss soldier was sentenced to more than a decade in prison in South Florida after he pleaded... 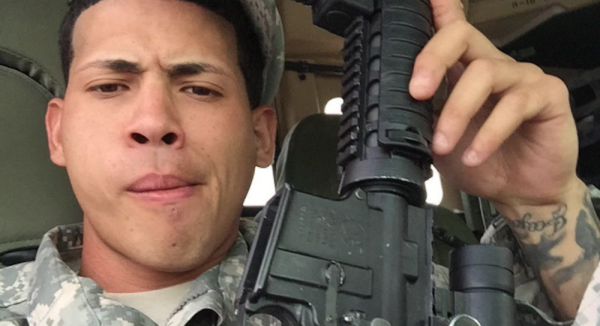 A former Fort Bliss soldier was sentenced to more than a decade in prison in South Florida after he pleaded guilty to selling methamphetamine while in his Army uniform to an undercover federal agent.

Former U.S. Army Sgt. Derek Calderon was sentenced to more than 10 years in prison May 24 after he pleaded guilty to one count of conspiracy to possess with intent to distribute 500 grams or more of methamphetamine.

He pleaded guilty as part of a plea agreement with federal prosecutors in October. As part of the plea agreement, two additional counts of possession with intent to distribute 500 grams or more against Calderon were dismissed.

Calderon sold meth, which he carried in his U.S. Army backpack with his name on it, to an undercover federal agent in March 2016 while he was stationed at Fort Bliss, court documents state.

A confidential source working with the U.S. Drug Enforcement Administration in South Florida called Calderon on March 23, 2016, claiming that he knew someone who wanted to buy “work,” according to court documents. An indictment states that “work” is a slang term for drugs.

Calderon then called the undercover agents to discuss the possible purchase of the meth, documents state. The agent agreed to travel from Florida to El Paso to buy one pound of meth for $7,500.

The men discussed a possible future purchase of about eight pounds of meth for about $6,500, the affidavit states. Calderon also allegedly told the agent that he was selling “blue crystal,” which he claimed was the highest purity of methamphetamine, records state.

The men then went to Calderon’s pickup, where the agent paid $7,500 to Calderon, who then allegedly gave the agent an Army backpack, which had Calderon’s name on it, with a pound of meth inside, documents state.

Calderon then posted a video on Instagram, a social media platform, a few days later showing him holding a stack of hundred dollar bills with the message, “This is what I’m about,” the affidavit states.

Calderon later agreed to sell more meth to the agent, documents state. The agent agreed to buy one pound of meth for $7,500, the affidavit states.

The agent deposited $1,500 as a down payment on April 12, 2016, into the bank account designated by an unknown associate of Calderon, according to the affidavit.

The drugs were then shipped from Phoenix by the U.S. Postal Service to an address in South Florida, the affidavit states.

The agent then again deposited $3,500 in the same bank account and $2,500 on April 18 into another bank account designated by Calderon, documents state.

Calderon was arrested in connection with the drug deals by U.S. Immigration and Customs Enforcement officers on June 27, 2016, in El Paso.

A federal judge in El Paso ordered that Calderon be transferred to South Florida to be prosecuted. Calderon was released from the El Paso County Jail on July 12 to be extradited to Fort Lauderdale, Fla., by U.S. Marshals, according to jail records.