This Fort Bliss Hospital Is Behind Schedule And $22M Over Budget 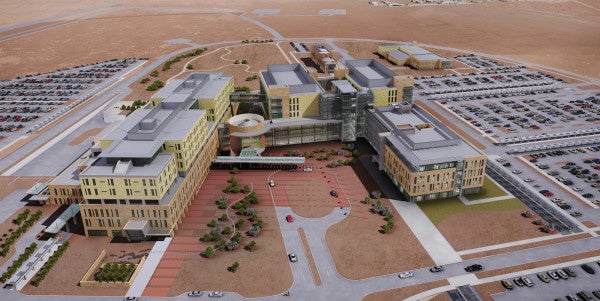 Construction of the massive, new William Beaumont Army Medical Center complex at Fort Bliss is almost two years behind schedule and at least $22 million over the original contract award.

The $648 million contracted construction cost of the six-building hospital complex has swelled to about $670 million, and will likely grow, Brad Hartell, the U.S. Army Corps of Engineers' construction manager for the project, said during a recent tour of the construction site.

Contracts for other work tied to the complex of buildings and equipment for the hospital and clinics will also add millions to the final price tag, Army officials said.

“This is not a building — it's a campus of six buildings. That makes it more complex,” Rodriguez said during the recent construction-site tour. “We had some hiccups in the process, but we're looking at a campus of six, complex buildings.”

The main, seven-story hospital will have 135 beds. Next to the hospital will be two, six-story clinic buildings and an administration building. The complex also includes a clinical investigation building with labs and a central utility plant with three power generators and room for a future, fourth generator.

The new medical complex is needed because of the aging, land-locked, current Beaumont hospital and because of the addition of thousands of soldiers to Fort Bliss in recent years, Army officials said. Fort Bliss went through a $5 billion expansion over a six-year period, ending around 2012.

Two Army agencies are overseeing the Beaumont project, which is being built by Clark McCarthy Healthcare Partners II, a joint venture of Clark Construction Group of Bethesda, Md., a Washington, D.C., suburb, and McCarthy Building Companies of St. Louis. The partnership won the bid in January 2013 to build the hospital complex. Officials with the joint venture declined to comment about the project.

Each contractor has been involved in building hundreds of hospitals and other medical facilities in the United States, including other military hospitals.

About 900 people now work at the construction site, and that number is projected to peak at 1,200 workers in about six months, Hartell said.

A large, already-paved parking lot was jammed with construction workers' vehicles during a recent workday. The completed complex will have paved lots with 4,000 parking spaces.

Besides paying for the main, six-building construction contract, which has now risen to about $670 million, the funding also will be used to pay for contracts for several other items needed for the hospital complex, including medical equipment and furniture, Army officials said.

Sundt Construction, based in Phoenix, received $48 million of the allocation for an infrastructure project for the hospital complex. That project began in late August 2011 and was completed in April 2013, the Corps of Engineers reported. The work included installing utilities, roads, and an electrical substation for the hospital complex. Sundt's contract was awarded in July 2011 for $43 million, and increased by $5 million due to contract modifications, the Corps of Engineers reported.

Other contracts have been awarded or will be awarded for the complex's helipad, main and secondary parking lots, access control points, and landscaping, which will include therapeutic gardens and recreation trails. The Corps of Engineers office in Fort Worth did not immediately provide information on those contracts. The ground-level helipad and some of the paved parking have already been done.

The hospital's opening is tentatively scheduled for July 2019, officials said. It will take about a year for the Army to prepare the hospital for operation after construction is completed, according to a project information sheet provided by Army officials.

“Due to the complexity of the project, and the changes in design, the general contractor (Clark McCarthy) has requested several time extensions,” and those requests, which are allowed under the contract, are being evaluated by the Corps of Engineers, according to the information sheet.

Clark McCarthy's winning bid, awarded in January 2013, was not final until June 2013 because the award was challenged by three competing construction partnerships.The U.S. Government Accountability Office, which handles protests on government contracts, dismissed the protests in May 2013, and Clark McCarthy was given the green light to proceed in June 2013, according to El Paso Times archives. No details were provided by the Army on reasons for the protests.

After construction is done and the buildings turned over to the Army, medical equipment and furniture will be put in place, staff training completed, and moves made from the old Beaumont, Rodriguez said.

The Beaumont project is on a course to take at least six years from construction start to hospital opening.

It took about five years to get a similar Army hospital built and opened — the $561 million, 947,000 square-foot Fort Hood replacement hospital complex in Killeen, Texas.

The Carl R. Darnall Army Medical Center's construction began in spring 2011, according to a Fort Hood press release. Construction was completed in November 2015, and the hospital opened in April 2016, said Randy Cephus, deputy public affairs officer for the Army Corps' Fort Worth office, which oversaw the Fort Hood construction project, and is overseeing the Fort Bliss replacement hospital project.

The Fort Hood hospital project exceeded the original contracted amount of $503.8 million by more than $57 million, with about half of the additional cost for medical equipment, Cephus reported. It went more than a year beyond the projected May 2014 completion date reported in a Corps of Engineers press release issued in September 2010, when the contract was awarded to Balfour-Beatty/McCarthy. It's the same McCarthy that's building the Beaumont hospital with another contractor.

The only major construction stoppage on the Beaumont project, according to Rodriguez and Hartell, was a three-week shutdown in late February and early March of 2015 for a site safety evaluation after El Paso welder Jesus Moreno Jr., 50, died in an accident at the site.

Moreno died from injuries he sustained after falling from a sixth-floor platform, according to a lawsuit his family filed against Clark McCarthy, and other companies involved in the hospital construction, including Midwest Steel Co., which employed Moreno.

Rodriguez, who was not in his current job when the fatal accident occurred, said safety changes were made as a result of the accident.

U.S. Occupational Safety and Health Administration officials are not commenting on the case because the federal agency has not yet closed its investigation of the Feb. 24, 2015 fatal accident, said Juan Rodriguez, an OSHA spokesman in Dallas.

The lawsuit, pending in federal court in El Paso, alleges Moreno's fall-protection equipment melted when Moreno used a propane device to preheat a steel column he was preparing to weld.

Clark McCarthy's lawyers in court filings said subcontractors and others not controlled by the contractor committed negligent acts or omissions which caused the fatal accident. Midwest Steel's lawyer alleged in a court filing that welder Moreno's actions caused his fatal accident.