A Fort Bliss soldier allegedly opened fire with a semi-automatic rifle through a door when El Paso police rang his home's doorbell, according to court documents 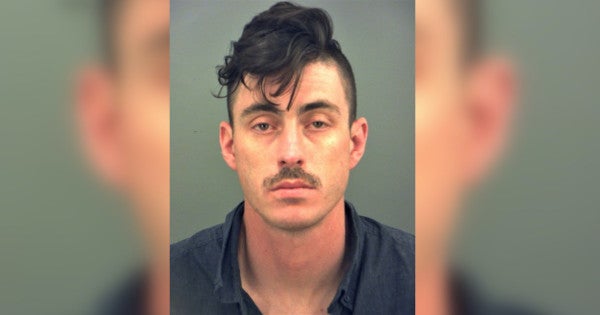 A Fort Bliss soldier allegedly opened fire with a semi-automatic rifle through a door when El Paso police rang his home's doorbell, according to court documents.

Documents obtained by the El Paso Times revealed new details in Monday's violence resulting in an officer shot and wounded and two others barely escaping injury.

An Instagram account for an Alex Jeffery has photos of him in a U.S. Army uniform, posing and shooting firearms and small dogs and cats.

The incident began at 1:10 a.m. Monday when patrol officers responded to a 911 hang-up call at Jeffery's home in the 8900 block of Comet Drive in a Northeast neighborhood off Hondo Pass Drive.

In the 911 call, a woman was heard crying and a man could be heard yelling in the background before the phone was disconnected, according criminal complaint affidavits obtained by the El Paso Times.

Two patrol officers, identified in the affidavits only as M. Martinez and D. Guerrero, arrived and spoke with people near a vehicle outside the house, documents stated.

The people included an off-duty El Paso police officer, Alexander Mallari-Valfre. They told the patrol officers that they didn't call 911 but friends of theirs in the home had an argument earlier.

Mallari-Valfre advised the officers that Jeffery owned firearms but that the weapons were last seen inside a safe in the bedroom.

Officers Martinez, Guerrero and Mallari-Valfre, who was armed, walked up to the front door.

“When the Officers rang the doorbell, (Jeffery) began to fire a semi-automatic rifle through the front door,” an affidavit stated.

According to documents, as gunfire ripped through the door, the three officers retreated from the entryway before Jeffery allegedly switched to a second shooting spot and fired again through a bedroom window.

Nearby home security camera video captured the sounds of the gunfire. The audio recorded an initial volley of gunshots, a long pause and then a second series of shots fired, the documents stated.

Officer Martinez was shot on his left ankle and the left face/ear area, the affidavit stated. He also had an injury to a forearm, police added. He underwent surgery and is recovering.

After the initial gunfire, Officer Guerrero took cover behind a vehicle near the home. Then, Jeffery switched positions to fire out the window and shots began striking the vehicle. A shot hit Guerrero on a shoulder epaulet of his uniform shirt but he was not injured.

A police spokesman declined to divulge the number of shots allegedly fired by Jeffery only saying it was “multiple” shots.

The three officers never returned fire despite the repeated barrage of gunfire.

The officers exercised “fire discipline,” said Sgt. Enrique Carrillo, a Police Department spokesman. “Officers cannot blindly and indiscriminately return fire into a residence if the offender is not visible to them.”

Jeffery soon exited the house, surrendered and was taken into custody, police said.

A woman was found inside the home, crying and upset, the affidavit stated. She had called 911 after she saw Jeffery grab a rifle.

Jeffery did not give police a reason why he opened fire on officers, Carrillo said.

Jeffery remain jailed Tuesday at the Downtown jail under a $125,000 bond. He has no previous arrests listed on El Paso County records.