When the 2020 edition of the event was axed on March 12, Chief Warrant Officer 4 Beofra Butler began to organize a social-distancing run. 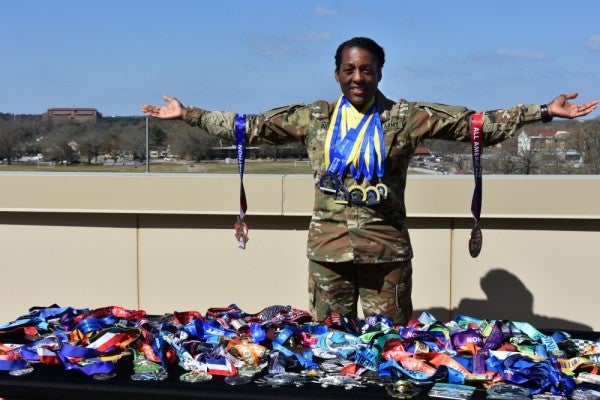 The race was canceled, but not the running.

Chief Warrant Officer 4 Beofra Butler made sure of that on March 28 and 29.

An ambassador for the All American Marathon, which was canceled on March 12 because of the coronavirus pandemic, Butler heard from several people that were still hoping to put their legs to work last weekend.

“No matter what you have going on in your life, no matter where you are, this is one type of exercise you can do anywhere,” said Butler, who has been stationed at Fort Bragg for three of her 26 years in the military.

The 46-year-old has run her share of races over the years. She doesn't know the overall number, but she knows the number of marathons.

“Oh my goodness, I could not begin to count the number of races,” said Butler, who was born in Germany but raised in Hinesville, Georgia.

She has four times competed in the All American Marathon, which features thousands of participants each March and is organized by Fort Bragg and the city of Fayetteville.

When the 2020 edition of the event was axed on March 12, Butler began to organize a social-distancing run.

“I knew someone who was training for her first marathon and All American was going to be it,” she said.

“Then there were several other people who said, 'We want to run.'”

“I took chalk and actually marked the sidewalk,” she added. ” … I marked it every other mile to kind of motivate them and make it seem like a race.”

Thirteen people participated in the run, which started and finished at Freedom Memorial Park in downtown Fayetteville.

Butler marked 13.1 on one side of the finish line and 26.2-ish — because, Butler says, sometimes your fitness watch is different — on the other side.

The first runners got going at 4 a.m. Sunday morning with participants starting at different stretches to make sure everyone was adhering to social distancing.

Butler also encouraged participants to bring their own water containers.

“We just tried to make sure they still had fun, but still remember that we have a situation going on here,” she said.

There were no medals awarded, but Butler had plenty of sanitizer and Clorox wipes on hand.

She also purchased some red, white and blue streamers and balloons to set the scene at the finish line, where she planned it so each participant could cross separately.

“Everyone ran through and broke the tape, so basically everyone was a winner,” said Butler, who was positioned to the side taking photographs as each runner finished.

“We made sure everyone broke the tape and we had several streamers, so when they touched that streamer, it was theirs.”

Once the run was complete, Butler held a small ceremony to thank everyone for participating and announced each person as a first-place winner.

Then, she presented each with a Ziploc bag that contained hydration products and a pack of Kleenex “to keep in the spirit of COVID-19.”

It wasn't the race they signed up for, but the running was enough.

“It was always a balance to where everyone wasn't out there at once,” she said.

“It kind of worked out really well. Everyone enjoyed it. They were happy to get out and just make it seem like a race.”