The first U.S. Army paratroopers began training at Fort Bragg during the nation’s preparations for World War II. All five... 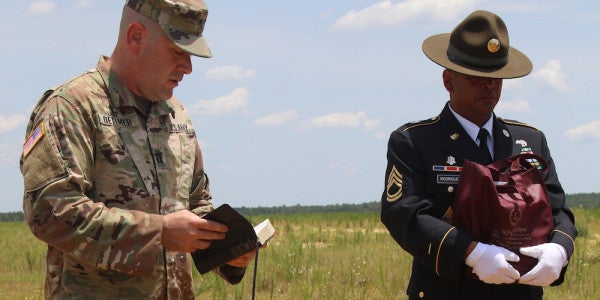 All five airborne divisions trained on the sandy drop zones of the post’s sprawling training area. And in the decades since, the vast majority of all of the nation’s paratroopers have, at one time or another, drifted down to Fort Bragg by parachute canopy.

For as long as Fort Bragg has been the “Home of the Airborne,” the installation’s drop zones have served as a sort of hallowed ground for former paratroopers.

In recent years, Sicily Drop Zone has become the site of the area’s largest “family reunion” during the 82nd Airborne Division’s annual Airborne Review. And many a veteran has taken his family to watch the routine training jumps that take place there.

Sometimes, the view is enjoyed by several generations of paratroopers — not only from the 82nd Airborne Division but also from other airborne units in Army special operations, the 18th Airborne Corps and 20th Engineer Brigade, among others.

When in the air, it’s safe to say that every paratrooper hopes for a soft landing. But at the same time, countless veterans also hope to one day have the drop zone as their final resting place.

Fort Bragg has stood as an Army installation for 100 years. And for much of that history, it’s been tied to the airborne.

The sands of Sicily are mixed, literally, with the remains of innumerable paratroopers whose ashes have been spread there.

Some of those ashes are spread in official Army ceremonies, with a chaplain overseeing the event alongside family and friends. Others are more private affairs.

Many Fort Bragg soldiers have stood witness to such ceremonies, or have heard stories of paratroopers choosing the vast drop zone as their final stop.

Plunkett, a former medic and physician’s assistant who served with the 3rd Special Forces Group at Fort Bragg, had likely conducted many jumps onto Sicily Drop Zone.

He died two years ago, but Rodriguez’s visit to Fort Bragg helped see that one of Plunkett’s last wishes was honored.

Plunkett, like many paratroopers who came before him and the many who will come after, is now forever part of Fort Bragg.